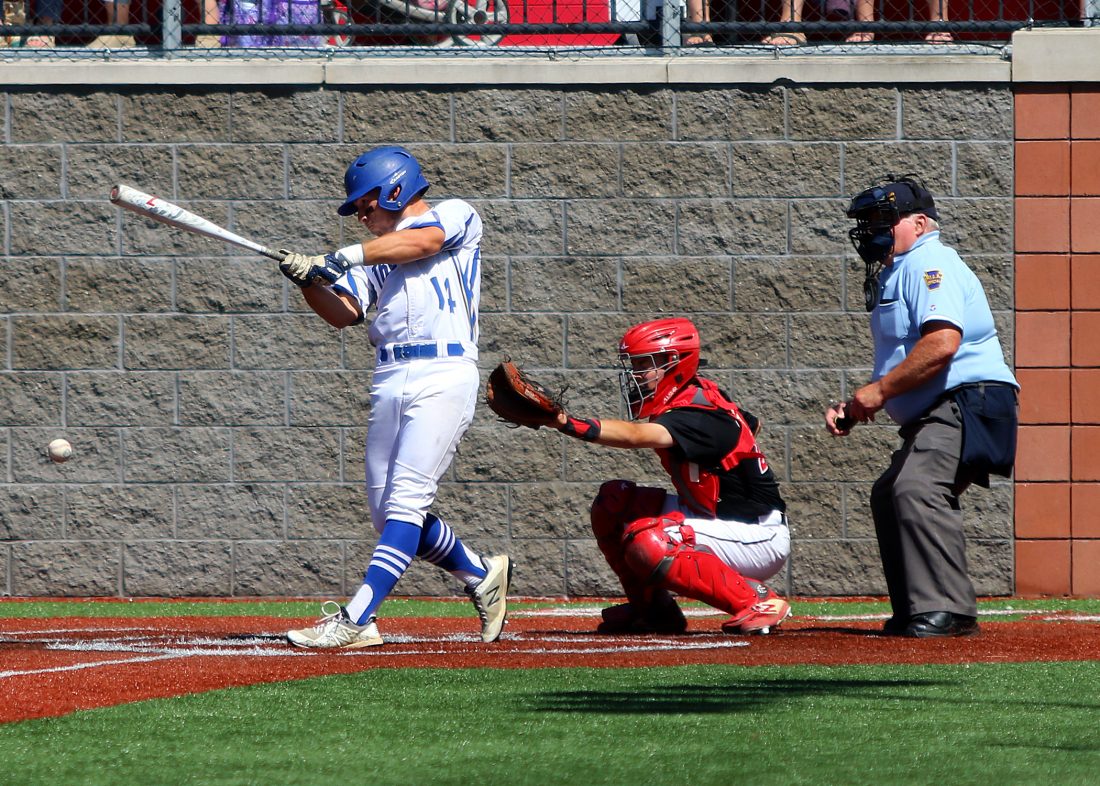 Sentinel photo by MATT STRICKER
Mount Union’s Quinnten Fultz gets a two-run double in the fourth inning, driving in the go-ahead and insurance runs as the Trojans won 3-1 Tuesday in Dubois.

DUBOIS – Mount Union advanced to the PIAA baseball finals for the first time since 1996 after defeating Franklin in the Class 3A semifinals by a 3-1 score at Showers Field on Tuesday afternoon.

“In 1995 and ’96, I got to experience it as a player. It’s the greatest feeling in the world and I’m so happy these guys get to do it,” Mount Union coach Tim Hicks said. “Just an amazing game. Hats off to Franklin. They hit the ball hard, but our guys stood up. We had some great defensive plays, a double play to end the game. You can’t ask for anything better.”

Quinnten Fultz broke the 1-1 tie in the fourth by ripping a double down the third-base line scoring the eventual game-winning runs in Kobe Hand and Ethan Carbaugh, who both reached on consecutive singles.

“I saw two curveballs first, so it was a 2-0 count. George Goodling, my coach, told me in a 2-0 count always look for the fastball and that’s what I did. I roped it and put it down the left-field line,” Fultz said. “My thoughts were I got those insurance runs. It’s been an amazing run. I can’t wait to play in Medlar Field. This year is something special. This is the year to do it.”

Dylan Gearhart gave up an unearned run in the first and despite allowing nine hits, kept the Knights off the scoreboard the rest of the game.

“Dylan did a great job throwing the ball, getting out of jams. I think they had baserunners every inning. He is a workhorse for us,” Hicks said.

Gearhart improved to 10-2 on the season with an ERA under one. He struck out two and didn’t give up a walk.

“It feels incredible. I can’t even describe to you how I feel. To be the winning pitcher makes me speechless. I know every time I step on that rubber, my team has my back,” Gearhart said. “I know we started out shaky but we picked our heads up and played Mount Union baseball. Now it’s time for me and my boys to play for a state title.”

The Trojans got on the scoreboard first when Grayson McClain singled, went to third on a Matt Harshbarger knock to left and plated on a ground out by Gearhart.

Franklin (23-2), who saw its 22-game winning streak snapped, answered in the bottom of the first when Tyus Wood reached on an error, went to second on a base hit by Connor Rackow and scored on another error by the Trojans.

Mount Union toughened up on defense with some key outs that proved decisive in the victory.

In the third inning, Fultz made a diving catch with a Knight runner on second to save a run.

“Quinnten had the game of his life. He made that great defensive play right before that. They had a chance for the go-ahead run and he made the diving catch for the third out,” Hicks said. “It’s funny how baseball works out. He’s the guy up with runners in scoring position and he drives the ball down the left-field line to score two runs. That guy had himself a day.”

Gearhart picked off a a runner at first with a nice move when Franklin had runners on first and second with one out. Ian Haynes (9-1) dropped his first game of the year for Franklin. He gave up 10 hits, struck out four with no walks.

“We did that in the opening round of the state tournament and as soon as I heard Kobe say my name I knew it was time to get ready to go,” Gearhart said. “I saw him break and I knew he was dead in the water.”

With one out and a runner on in the fifth, Hand made a backhand on the ball and flipped it from his glove to a waiting Gearhart for the out.

“He misplayed that off the turf and these guys do that all the time, they flip the ball to their glove. Who would have known in a state playoff game you would need that play to get out of a jam? Our defense wasn’t perfect but we came up in the big moments and got out of trouble,” Hicks said. “The pressure doesn’t get to these guys. We have fun, stay loose and that’s the best way to win games. So now, state finals. Let’s go and have some fun.”

Ethan Carbaugh led Mount Union with three hits. McClain, Harshbarger and Hand had two hits each. Rackow had two hits for the Knights.