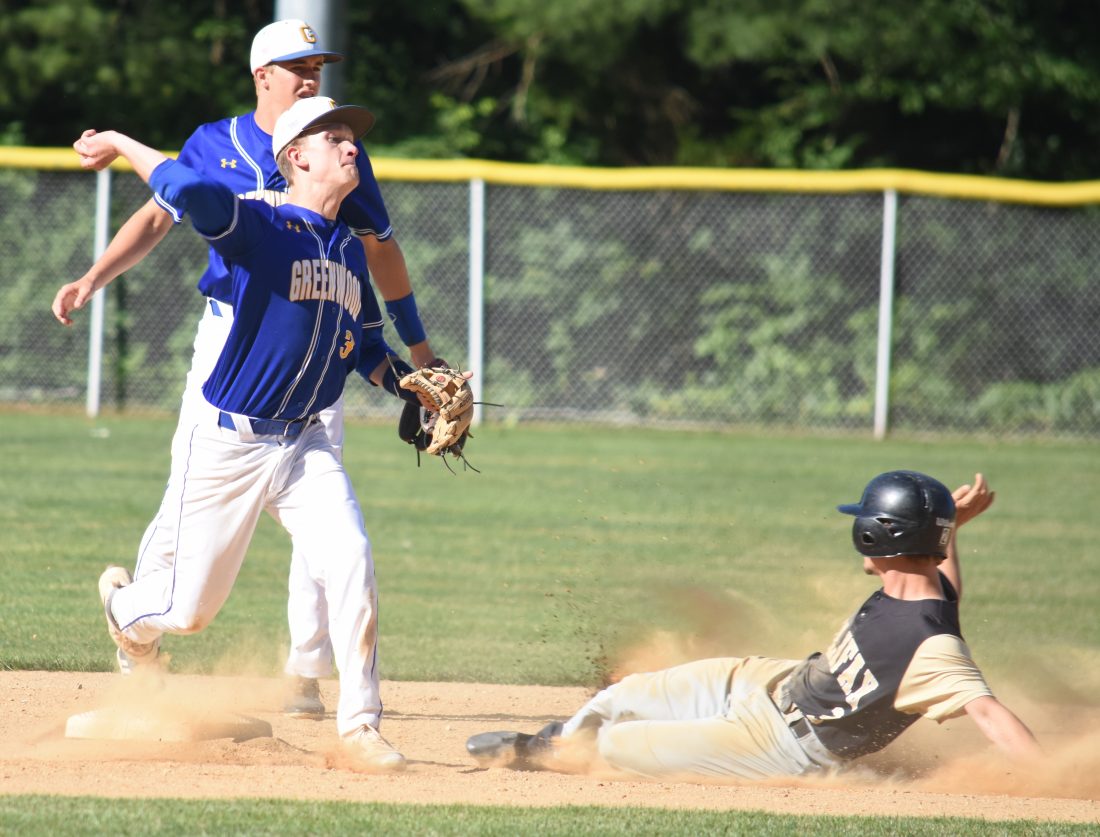 Sentinel photo by MIKE GOSS
Greenwood’s Aaron Bollinger tags second and completes a double play as Halifax’s Tyler tries to break it up Tuesday in Newport.

NEWPORT — Things could not have been more perfect for Greenwood during its PIAA Class A semifinal game.

Greenwood (18-8) built an insurmountable lead en route to a 10-0 win in five innings over Tri-Valley rival Halifax in a mercy-rule game.

Greenwood roared for six runs in the first inning and never looked back. The big lead allowed coach Mark Sherman to conserve his ace.

Greenwood’s Luke Myers was pulled after three innings at an even 50 pitches, making him eligible to pitch in the state championship on Thursday. That game will be at 1 p.m. at State College’s Medlar Field at Lubrano Park against District 10 champion West Middlesex.

“I have been talking with coach for the last few days about how things could play out,” Myers said. “I knew if we got a lead there could be a chance [to pitch in the Championship]. If it was a close game there was a possibility I wouldn’t be able to, so luckily it worked out.”

“We focused on this game only,” Sherman said. “We approached this as the championship game — if it meant (Myers) going the full game so be it. Fortunately it was not necessary.”

Greenwood’s patience at the plate was key to grabbing control of the contest.

Bryce Dalpiaz led off the first inning by drawing a walk. Myers then singled up the middle after a prolonged at-bat and Aaron Bollinger drew a walk to load things up.

Aaron Morder was plunked to force in the first run. Garrett Howell then reached on an infield single after the ball took a funky hop off the mound to make the lead 2-0.

Avery Morder drove home two more off his line-drive single to left and Howell was able to score when the ball got past left fielder Hunter Zimmerman. The error also allowed Morder to advance.

Greenwood then played small ball. Reilly Taylor laid down a sacrifice bunt and Morder scored when Ethan Jezewski reached on an error, making the score 6-0 after one. Halifax starter Blake Miller was touched up for seven runs (six earned) in one-plus innings of work.

“We knew whoever got their feet grounded first had the upper hand, and we did that. Our M.O. for the entire year was continue to apply pressure,” Sherman said, referring to Greenwood’s four stolen bases. “We don’t change our game plan. The guys are peaking at the right time. We are manufacturing runs different ways, which is a good thing.”

Halifax was given an opening to start a comeback in the top of the second when catcher Carson Buffington reached on an error and courtesy runner Tyson Nerat stole second, but Myers induced a pair of grounders to quash the threat.

Greenwood went right back to work in the bottom of the frame. Myers led off with a single to left and aggressively took third when Bollinger reached on an infield single. Avery Morder laid down a squeeze to plat the first run and a Howell RBI groundout plated Bollinger to make the score 8-0.

Tyler Berzowski delivered a one-out single to right in the Halifax third, but Bollinger made a nifty play on a grounder up the middle for an inning-ending double play.

Greenwood added two more in the third when Jezewski drew a one-out walk and Dalpiaz singled. Myers reached on an error resulting in a run and Bollinger reached on a error while driving in a run.

Sherman then turned the ball over to Bollinger. Halifax greeted the new hurler with back-to-back hits to left by Nathan Blasick and Blake Miller. However, Blasick was caught stealing and Malakai Zilinski hit a slow roller which Bollinger scooped up and fired to second. The umpires then ruled interference when Aaron Morder’s throw hit the runner resulting in a double play.

Blasick, who pitched three innings in relief giving up three runs (two earned), sat down the side in order in the fourth.

Things looked promising for Halifax’s chances to extend the game in the fifth when Bryce Ertter socked a one-out double and Dylan Wells followed with an infield hit. However, Bollinger struck out Ryan Stahl, and following a Berzowski walk, Hunter Zimmerman grounded out to end the game.

The heights the Greenwood baseball team is reaching would have been hard to imagine just a few short years ago. The Millerstown-based school posted a combined 7-64 record during the 2012 through 2015 campaigns. The team had never made an appearance in the state tournament until last season, and never won a state playoff game until last Monday.

“This team has come a long way,” Bollinger said. “We have a great group of seniors who have helped out in almost every single sport.

“We took our bumps and bruises and learned,” Sherman said, who is in his seventh year at the helm. “We have gone though some up and down years. This is a good group of boys, they work hard and they earned it.”