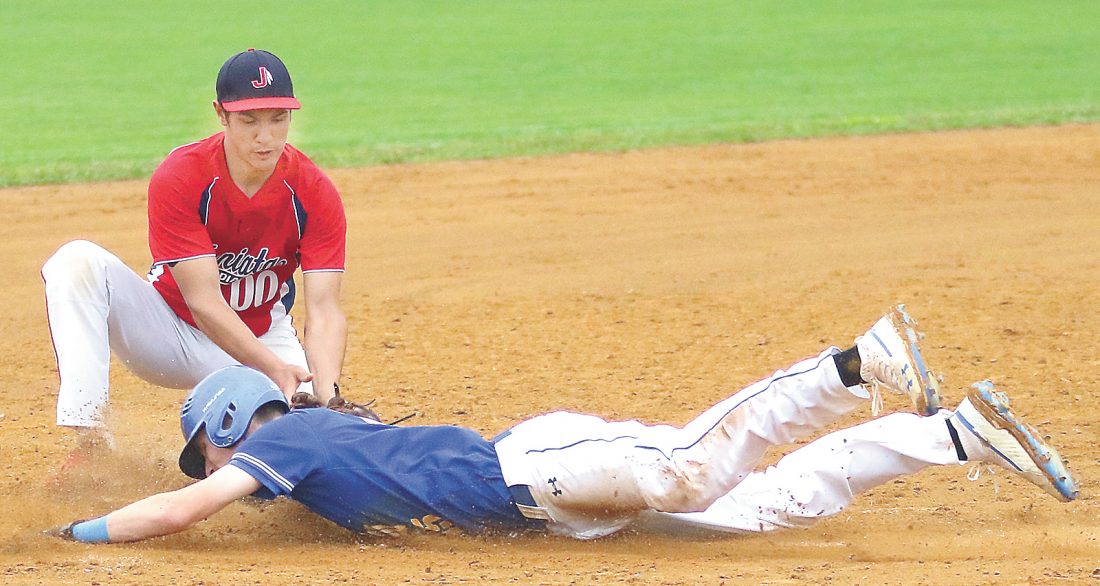 Sentinel photo by MATT STRICKER
Juniata shortstop Jamie Bailer, left, tags out Greenwood’s Bryce Dalpiaz at third after Dalpiaz was caught in a run down between third and home Thursday in Mifflintown.

MIFFLINTOWN — Greenwood finished the regular season with a win, but the Wildcats have a long road ahead of them if they hope to repeat as the District 3 Class A champion,

The ‘Cats had a dandy outing against Juniata Thursday, shutting out — and no-hitting — the Indians with Luke Myers and Aaron Bollinger doing the heavy lifting.

The duo combined on the bump for the almost-perfect game that saw only two Juniata runners reach base on a trio of walks. Myers, in six innings of work, struck out 11 batters to make it easier for his offense to put runs on the board.

His offense — mostly Bollinger — did just that, scoring twice in the opening half then adding five runs across the final two frames. Bollinger was 3-for-4 with three RBIs. Reilly Taylor, who also drove in a pair, had the game’s only extra-base hit, a double.

Juniata (6-11, 6-10) has two nonleague games left on the slate; the Indians are home today against Bald Eagle Area then travel to Montoursville to end the season.

Greenwood (10-8, 12-6) won the TVL West title and will be part of the league tournament, which starts with a semifinal game Monday at Halifax. The ‘Cats start play in District 3 on May 20. Barring a change in the district power ratings, they will travel to Christian School of York that day.

COVE — Despite committing four errors, East Juniata got behind the trio of Logan Wagner, Daniel Kanagy and Evan Clouser in its 8-3 victory over Susquenita in Tri-Valley League baseball Thursday.

Wagner went 2-for-4 with three RBIs and two doubles. Kanagy and Clouser each went 1-for-3 with an RBI.

The Trojans had eight different players who had a hit as well as having six players with an RBI.

MIDDLEBURG — It was a complete team performance for Midd-West in its 5-1 victory over Hughesville in a Heartland Conference interdivisional softball game Thursday.

Marlo Spriggle, Caroline Zerby, Destiny Walter and Kailey Weller each had two or more hits in the game for the Mustangs.

Raya Kunes went all seven in the circle striking out 10 batters while walking only one.

COCOLAMUS — East Juniata struggled against Susquenita in its 19-1 Tri-Valley League loss on Thursday.

Ashlynn Searer drove in the lone run for the Tigers.

BELLTOWN –Lewistown’s Drake Schaeffer led the West in a 12-3 rout of Belltown Thursday in the only game played in the Mifflin County Babe Ruth League.

The contest was called after five innings due to darkness.

Schaeffer was the winning pitcher with three innings of work and had three of Lewistown’s eight hits, including two doubles. Braden Sheaffer added two hits, one a double.