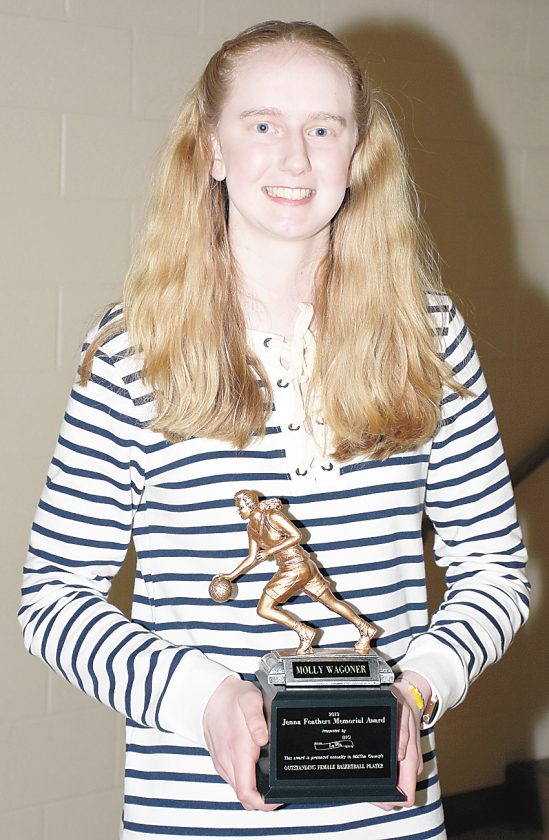 “Coming from the community is really nice. We kind of struggled this year with young players and injuries. I’m excited about next year because we are young and have players coming back from injury like Emma Yeager. I’m looking forward to next season.”

Wagner, just a sophomore, averaged a double-double for the season with 13.3 points and 13.1 rebounds a game. She also managed to block 2.7 shots per contest. She put up those impressive numbers despite missing four games due to illness.

“I’m a hundred percent back and ready for next season. I got a little bit stronger. I got pushed around as a freshman and this year, I pushed people back,” Wagoner said. “I got better in my scoring too. I averaged around 7 to 8 points a game as a freshman and 13 this year.”

Aumiller averaged 8.4 points and four rebounds a game with Bodtorf scoring at 8.4 a clip and pulling down 7.8 rebounds a contest.

“I was surprised. I know with Hannah and Bri it was a tight race. Any of us could have one, I was shocked and happy,” Wagoner said. “I’m honored to win the award.”

The Huskies finished the season at 8-14. In addition to Wagoner and Yeager, Aumiller missed time with a dinged shoulder and Bodtorf went down late in the season.

“It was a tough season but we fought through it. I believe it will make us stronger for next season and make us a better team,” Wagoner said.

The Feathers Award is presented annually by Big Lewie Radio to Mifflin County’s top girls’ basketball player. Nominees are voted on by local media, including The Sentinel, and representatives of the Mifflin County High School’s athletic department. Each voter chose three candidates, with points awarded to first, second and third-place vote recipients and the award going to the athlete with the highest vote total.