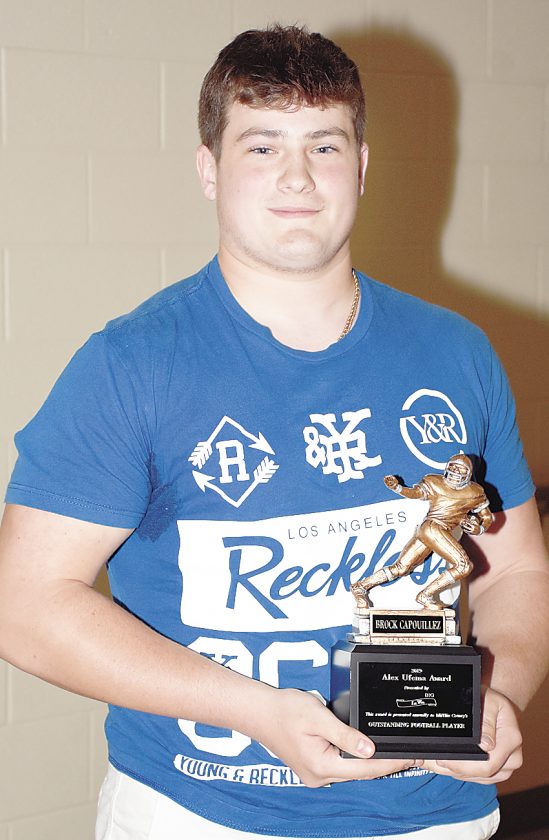 “It feels great after all the work I put in. I’m real happy and my family is too,” Capouillez said. “I have mixed feelings about it because I felt there are other kids on my team that should have won something. I want to thank everyone who got me to where I am.”

Capouillez, who will continue his football career at Football Championship Subdivision school St. Francis, Pa., was a Mid-Penn Colonial First Team selection despite moving from linebacker to defensive end. He will be moving back to linebacker with the Red Flash.

“I’ve had a great four years and Mifflin County and now I’m ready to start the next phase of my athletic and academic career,” Capouillez said. “I believe St. Francis offers me the best chance to grow and improve as a football player. I’m going to play wherever they want me to play, but I’ll probably be moved back to linebacker. I don’t really have the size to play on the line. I’m looking forward to getting started.”

Capouillez finished his senior season with 77 tackles, 4.5 for loss, for an average of seven tackles a game. He also had a sack and an interception. As a fullback, he carried 14 times for 66 yards and one touchdown.

“I always had the same mindset from my freshman year to my senior year,” Capouillez said. “I’m really fortunate for the all the coaches I’ve had. They each brought something to the table to make me better. Like I said, I really appreciate everyone who got me to where I am.”

Wright threw for 1,311 yards and seven touchdowns while rushing for 310 yards and eight scores. Schaeffer, just a sophomore, rushed for 936 yards and nine touchdowns.

Mifflin County finished the season 6-5, winning the Mid-Penn Colonial championship and advancing to the District 6 Class 6A championship game against State College.

The Ufema Award is presented annually by Big Lewie Radio to Mifflin County’s top football player. Nominees are voted on by local media, including The Sentinel, and representatives of the Mifflin County High School’s athletic department. Each voter chose three candidates, with points awarded to first, second and third-place vote recipients and the award going to the athlete with the highest vote total.