Win is first against CV in team history 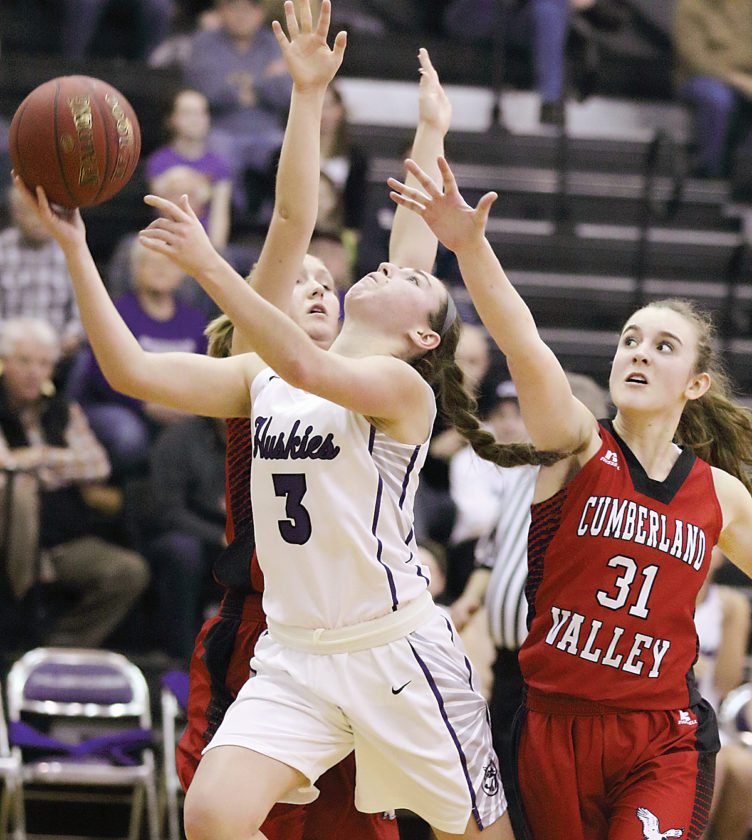 LEWISTOWN –It’s been a season of firsts for the Mifflin County girls basketball program, and after Tuesday night’s 51-50 win over Cumberland Valley in Mid-Penn Conference action, another first was added to the list.

Just coming off its first regular-season sweep of State College, the Huskies defeated Cumberland Valley for the first since the two teams began playing one another in 2012.

The win snapped an 11-game losing streak against the Eagles.

Despite this not being a typical season for the Eagles — who appeared in three straight state championship games through 2016 — they didn’t give up and made the game come down to the final seconds for the Huskies.

“To the kids credit, we showed some grit,” Mifflin County coach Roger Herto said. “We showed some fight on defense tonight and I thought that played a big part in us turning things around tonight.”

It was in those final seconds that strategy was on the Huskies’ side.

With Cumberland Valley out of timeouts and Abbie Miller making it a one-point game with fewer than five seconds remaining, the Huskies were reminded that they could hold onto the ball after the shot and let the clock run out for the win.

That’s exactly what Eleana Eckley did before the celebrations began.

“I have to give kudos to my assistants because they were the one’s who said to me that they’re out of timeouts and if they score to not inbound the ball,” Herto said. “We saw the ball go through there and saw that it was just under five seconds left and at that point we just ate it.”

If there was ever a team win, Tuesday’s game was that for the Huskies.

After getting the lead for the first time with just under two minutes to play in the third quarter, the Huskies found a way to sustain the lead — getting it up to as much as six at one point in the fourth — never to relinquish it.

Defensively, nobody had a bigger game for the Huskies than 6 foot-2 freshman Molly Wagoner, who celebrated her birthday in style.

Often seen all over the court, diving after the ball and distrupting the Eagles’ passing game, Wagoner had five blocks and a pair of steals — including in the game’s final minute — to help the Huskies overcome Cumberland Valley.

“I didn’t realize it was her birthday (until the student section started singing) but that’s a pretty good birthday for Molly,” Herto said. “I think a lot of people would have that birthday if they could have it. She had another solid game for us, and since missing the first two games with an injury, she has just gotten better.”

Another big contributor in the defensive game was Emma Yeager. The freshman had no easy job having to defend the Eagles’ Julie Jekot, whom Herto says is their best offensive player.

After having some struggles defending Jekot in the first half and allowing 12 points, Yeager shut her down the rest of the way.

The late game strategies would not have been an impact if Herto didn’t make a necessary change he had no plans on doing at any point in the game.

With the Eagles opening the game up on a 13-2 run, Herto called a timeout and switched the defense from zone to man for the remainder of the contest. The change did wonders for the team.

“I told the girls that it looked like we were carrying 50 pound weights on our back, everybody looked sluggish,” Herto said. “It looked like they were not into the game, and I had no intentions of going man, none, zero. I thought that was the only way we would get out of it and to the kids credit, we did.”

Offensively, the Huskies were led by the typical contributors.

Eckley scored a game-high 23 points, 15 of those in the second half. Hannah Aumiller (12 points) and Rylie Rittenhouse (11) also had solid contributions and all of the Huskies’ 3-pointers.

For the Eagles, Allison Hinish finished with 11 points while Abbie Miller had 10 to go along with Jekot’s team-high 12.

Despite all the obstacles Mifflin County has overcome from both health and having to travel for 15 of its 23 games this season, Herto says there is work to be done. The first step will be getting games off to better starts, especially with a matchup against a tough Harrisburg team on Friday.

“We still have a lot of things to fix,” he said. “We can’t continue to have these slow starts, it’s eventually going to catch up to us. I guarantee we go to Harrisburg and have that, it won’t end in our favor. You can’t have that against a team like that.”

First thing’s first, though. The Huskies will have take care of business at Carlisle today, a team Mifflin County beat by 50 earlier this season.

Herto is worried it could be a trap game because of that success and the team may have its mind jumping ahead to Friday.