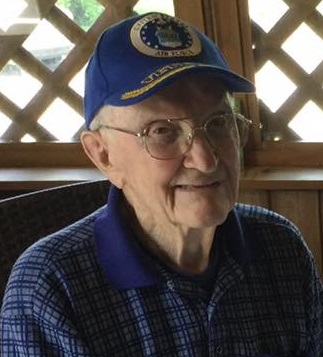 Born on Jan. 4, 1925, in Jackson Township, he was the son of the late Chester S. Wilson and Bessie T. (Powell) Wilson who preceded him in death.

Clyde was a graduate of Stone Valley High School Class of 1943.

He also served in the U.S. Army Air Corps from 1943-45 during WWII. He was drafted into the Army then transferred into the Air Corps. He completed basic training in Miami, Fla. He trained for radio operator in the 8th Air Force during which time he flew missions over Europe. Rep. Benninghoff presented him with a flag that flew over the Capitol.

He was an auto mechanic and operated a Texaco station with a repair shop. He retired in 1988 from Penn State University, where he was employed at the golf course.

He was a member of Stone Valley Bible Church in McAlevy’s Fort where he sang in the church choir. He was also a member of VFW Post 5935 in Belleville.

He enjoyed golfing, playing the guitar, singing, hunting and fishing. He got a hole-in-one while golfing when he was 85 years old. He sang and played in a bluegrass gospel band called Stone Valley Boys and Girls. He was given a certificate of appreciation for preserving county and gospel music.

A memorial service will be held in his honor at a later date.

Burial will be private and at the convenience of the family at Green Lea Cemetery.