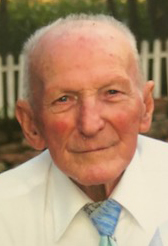 After graduating from high school, he served in the Army infantry during WWII.

He was employed at Standard Steel in Lewistown, where he was a lathe operator for more than 40 years before retiring.

Mr. Kline was a member of Mt. Bethel Church in McClure where he served as an elder.

In his spare time, he enjoyed working in the machine shop at his house, carpentry, gardening and spending time on the mountain which he did three days a week.

He was preceded in death by one daughter, Linda Marie Kline; two brothers and one sister-in-law, Edgar Kline and Richard Kline and wife Bonnie; and two sisters, Gladys Schlaline and Erma Goss.

Visitation will be held 10-11 a.m., Saturday, Sept. 8, followed by a memorial service at 11 a.m. at Mt. Bethel Church in McClure with the Rev. Robert Nash and the Rev. Donald Wise officiating.

Contributions in lieu of flowers in his memory may be made to Mt. Bethel Church, 16 E Specht St, McClure, PA 17841.