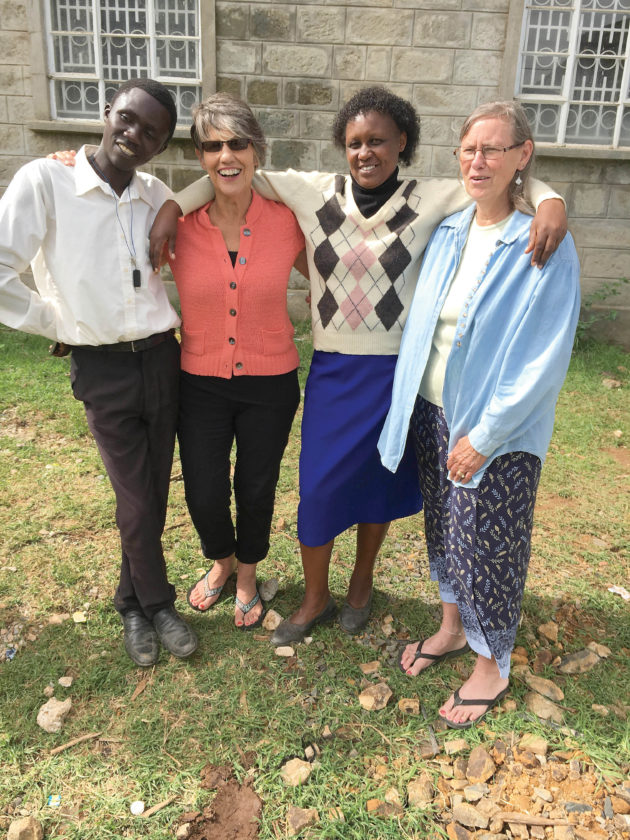 Submitted photo
Pictured, from left, are Steve Destine, Ann Kanagy, Beatrice and Karen Zook. Steve and Beatrice were among 15 Kenyan leaders who participated in the DivorceCare for Kids leaders’ training, held by Kanagy, Zook and Karen Goss (not pictured), in Eldoret, Kenya.

Ann Kanagy and a team of two other ladies, Karen Goss and Karen Zook, traveled on May 10 to Eldoret, Kenya, where they helped the Eldoret community implement a single moms’ support ministry.

The team trained leaders in DivorceCare for Kids, a program created to bring healing and hope to children whose families experienced separation or divorce. The program began in the United States, but was delivered to Kenya at the request of a pastor couple, Titus and Eunice Musyimi.

During their first two weeks in the community, the team met with Kenyan people interested in serving as leaders to the multitude of children in Eldoret who have experienced divorce or separation. Because nearly all the leaders experienced the heartache of family separation as children, the training offered them an opportunity to walk through individual lessons as children would.

On May 27, children attended DC4K for the first time in Eldoret. In the United States, each DC4K group is limited to 12 children. In Kenya, the first day brought nearly 60 children to the program. Children were divided into four groups with three leaders per group.

Single Moms Support Care, another program, was also introduced during the team’s time in Kenya. More than 20 single moms met each Sunday afternoon and formed a group, Women of Hope, led by a team of five women who planned to meet the first and third Sundays of each month.

The Musyimis and other Kenyan leaders are working hard to provide these avenues of healing and hope to a multitude of children and single moms residing in and near Eldoret.

In Mifflin County, DC4K is a 13-week program that meets in three locations — Belleville, the YMCA in Burnham and the LUMINA Center in Lewistown, beginning again in September 2017. Single Moms Support Care will resume meeting in September, from 6:30 to 8 p.m. on the second and fourth Fridays of each month at the New Life Church cafe, Burnham. For more information, call or text 717-437-4946.

LEWISTOWN — The Rhodes Memorial United Methodist Church will reopen its doors for worship with a service at 10:45 ...

Life is about choices, choose to follow the Lord

Choose for yourselves this day whom you will serve. Joshua 24:1 What does the word “choice” mean? This is ...

Editor’s note: To have your church’s Vacation Bible School event listed on the Religion page, email ...

The Rev. Terence Brosius, along with his wife, Caren and children, Grace and Scott, will to begin work at Richfield ...