The Pennsylvania Supreme Court on Friday dismissed a challenge to the governor’s statewide moratorium on foreclosures and evictions, leaving in place an order that shields renters from losing their homes for failing to pay rent during the pandemic.

Housing advocates expressed relief, landlords frustration, while a dissenting justice had harsh words for the majority, which said in Friday’s unsigned, one-line ruling that the court had made a mistake by accepting the case in the first place.

” The Governor took precipitous action that has impaired the business interests and property rights” of thousands of landlords, wrote Justice David Wecht, a Democrat, adding the court should have decided whether Wolf was within his rights to do so.

Like many Democratic and Republican governors and local officials around the U.S., Wolf, a Democrat, imposed a moratorium on foreclosures and evictions to prevent people from losing their homes in the midst of the virus outbreak and widespread joblessness. The state’s moratorium was recently extended to Aug. 31, though advocates are pushing him to make it indefinite.

“During this pandemic, staying in our homes is lifesaving,” said Patty Torres, organizing director for Make the Road Pennsylvania, an advocacy group for Hispanic immigrants. “With this lawsuit now put to rest, it’s time for Governor Wolf to extend the eviction moratorium indefinitely and make sure that we can all be safe and healthy in our homes.”

Landlords had been waging a legal fight against the moratorium, saying they are hard-pressed to keep up with taxes, insurance, utilities, maintenance and mortgage payments without the ability to enforce lease agreements.

The Pennsylvania Residential Owners Association said it was frustrated and disappointed by the Supreme Court’s refusal to issue a ruling.

For landlords, she said, “if this continues, their business will collapse. Without income, these people will be out of business … They’re going to lose those properties. then we’re looking at a bigger issue. We’re looking at tenants without a place to live.”

Wolf’s ban on foreclosures and evictions does not cover a tenant who damages property, breaks the law or breaches the lease in some other way aside from nonpayment of rent or overstaying a lease.

Pennsylvania is using $175 million of its federal coronavirus relief money to provide rental assistance to eligible tenants and mortgage relief to homeowners, but landlords say a $750-per-month cap on payments will not be enough to cover their costs on many housing units, especially ones large enough to accommodate a family.

In other coronavirus-related developments in Pennsylvania on Friday:

The Pennsylvania Department of Health is hiring 1,000 additional contract tracers to bolster the state’s efforts to contain coronavirus outbreaks by quickly notifying people who might have been exposed.

The Health Department on Friday announced a $23 million, federally funded contract with Atlanta-based staffing agency Insight Global to recruit, hire and train the new workers, who will join the state’s existing contact-tracing force of more than 650.

The new jobs include full-time and part-time contact tracers and supervisors, with hourly rates ranging from $18 to $24. The Health Department said recruitment will be focused on workers who have been laid off because of the pandemic.

Contact tracers identify people whom COVID-19 patients have been in contact with so they can be tested and isolated.

The Health Department has also said it is seeking to test out a mobile contact-tracing app that automatically notifies people if they might have been exposed to the virus. It relies on Bluetooth wireless technology to detect when someone who downloaded the app has spent time near another app user who later tests positive for the virus.

The Health Department said 970 more people have tested positive for the virus, with 13 new deaths.

The new case numbers include an increase of 244 in Allegheny County, though 30 of those are from tests conducted more than two weeks ago, health officials said. Philadelphia reported 130 new infections.

The seven-day daily average of new cases rose by about two-thirds in the month of July, according to the COVID Tracking Project, driven primarily by increased spread in counties in the southern half of the state.

Since the beginning of the pandemic, more than 112,000 people have tested positive for the virus, and 7,189 deaths have been attributed to COVID-19. More than two-thirds of the state’s deaths have occurred in nursing homes and other facilities that care for older people.

The number of infections is thought to be far higher than the state’s confirmed case count because many people have not been tested, and studies suggest people can be infected without feeling sick.

For most people, the virus causes mild or moderate symptoms that clear up in a couple of weeks. Older adults and people with existing health problems are at higher risk of more severe illness, including pneumonia, or death.

Pa. to pay for mail-in ballot postage in election

HARRISBURG (AP) — Pennsylvania will foot the cost of postage for voters to mail in ballots in November’s ...

GOP lawmaker blasted over parody of appeal for tolerance of transgenders 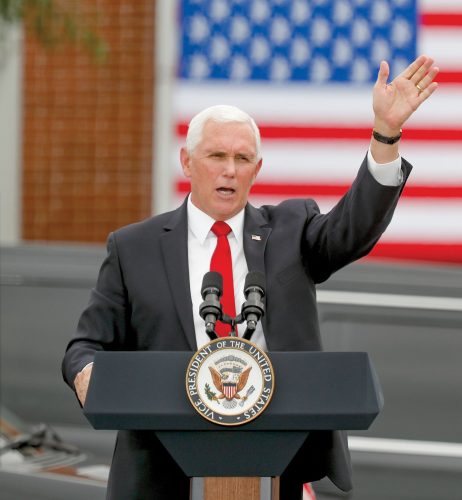 Pence warns of lack of safety

HARRISBURG (AP) — A contact-tracing app that was downloaded by one-fifth of Ireland in 36 hours might undergo a ...

HARRISBURG (AP) — Pennsylvania bar and restaurant owners said Tuesday they have been unfairly blamed for rising ...