Black-owned eateries drawing crowds in the south, no meat necessary 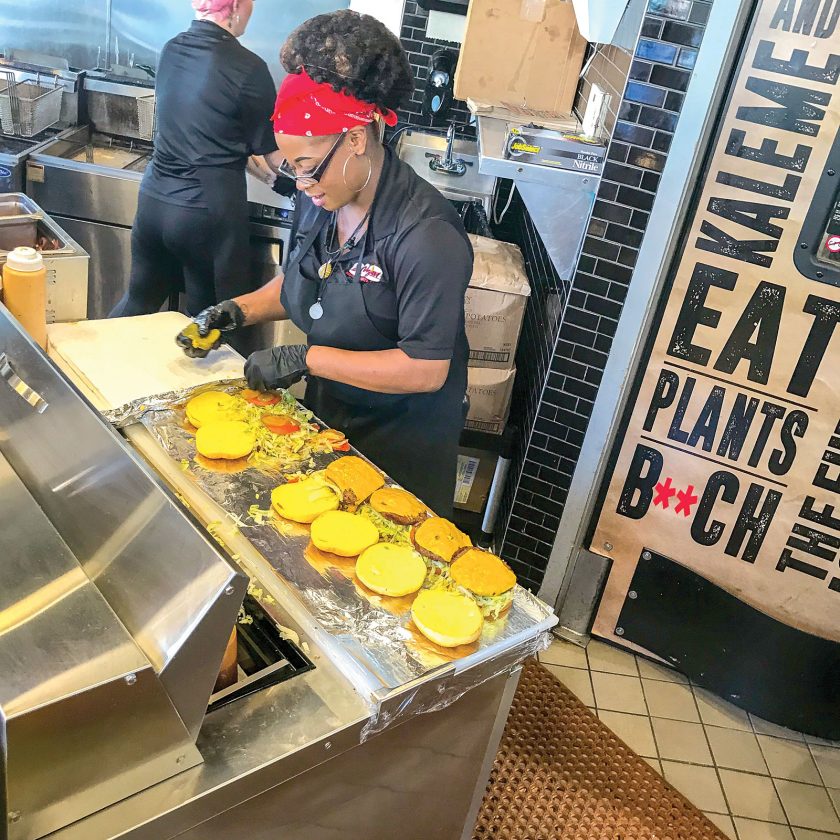 Todd A. Price/The Daily Advertiser via AP
The staff at a meat-free restaurant in Atlanta, treats work like a party.

ATLANTA (AP) — The doors opened at 4 p.m., but the line formed an hour earlier at this restaurant in Southwest Atlanta, minutes from the historically black Clark Atlanta University. No one seemed to mind the wait.

“I’m excited,” one woman told another.

“I heard people are out here until 1 a.m. in the morning,” another said.

At first the crowd, young but with a smattering of families and middle-aged women, fiddled with their phones, which is how they likely first learned about this place on Instagram. They might have seen Usher or Biz Markie biting into burger or holding up a takeout bag like a trophy. Soon the phones were down and everyone was seduced by real life. The windows were open. The hip-hop pumping. The staff was waving their hands, calling the first timers “virgins” and repeat customers “sluts.” It smelled like meat was on the grill except that’s off limits here. This was Slutty Vegan. Nothing from an animal comes out of this kitchen.

Cole’s restaurant is a phenomenon, with its 297,000 Instagram followers, two more Atlanta locations planned and a food truck that people chase like sweaty kids on summer break hunting the ice cream man. This burger joint, though, is just the most buzzed about example of a new wave of vegan restaurants across the South. They serve big flavors. They have style. And they’re black owned. As the trend of vegan restaurants gains momentum it’s calling attention to the various reasons people choose vegan lifestyles. Even with Southern palates acclimated to the fried and smothered, skeptics are embracing new meatless but mouthwatering dishes.

“I grew up in a house with a single mother who worked four jobs. My father was in prison. I was supposed to be a statistic. You hear what I’m saying to you?” said Cole, who leans in and chops the air with her hands when she makes a point.

At Southern V in Nashville, Tiffany Hancock took her mom’s and grandmother’s traditional recipes and “veganized” them. The menu at the North Nashville restaurant, which she runs with her husband, Clifton, includes turnip greens, baked beans, Nashville-style hot fried “chick’n” and barbecue jackfruit sandwiches. The business started as a farmers market vendor selling vegan doughnuts, then graduated to a take-out operation before becoming a full restaurant in April 2018.

When Hancock first went vegan five years ago, it was hard to find ingredients, much less restaurants, in Nashville. And the places that catered to vegans at the time weren’t talking to her and her family.

“We’re not saying that there weren’t people who were African-American or black who had that lifestyle, it just wasn’t really marketed that way,” Clifton Hancock said. “Typically when you think of veganism, or even vegetarianism, it’s normally in more upper-class, affluent areas with like a Whole Foods or a Trader Joe’s.”

The Hancocks made sure the menu at Southern V was familiar to Southern eaters, because they knew these were the flavors so many of their customers grew up eating. They also realized from the start that they needed to lure in diners who still ate meat.

“We knew that the vegan community could not support us and keep us open,” Tiffany Hancock said. “We have to be able to service those who are not vegan, because those are the people who are going to keep our doors open.”

Dymetra Pernell, who turned a recipe for vegan ice cream into a thriving retail and wholesale business, understands that lesson. The Atlanta-based chef’s First Batch Artisan Foods also sells weekly meals to-go at a pop-up in a record shop.

“I think this catapulted a lot of black-owned businesses, because we understand the culture. We understand what we like to eat,” Pernell said. “And we also understand that if it doesn’t taste like mama made it or grandma made it, they’re probably not going to eat it.”

All the restaurant owners said they see more black customers, many who still eat meat, getting excited about vegan food. Sonya Brown-Tillison, who opened NOLA Vegan this summer in New Orleans, gives celebrities some of the credit.

“A lot of artists are pushing veganism now. You get people like Beyonce talking about eating healthy and the benefits of a vegan diet,” Brown-Tillison said. “You hear the conversation now about our ancestors eating seeds and grains. People are talking about how we can live longer.”

Living longer and living better, is the main reason the Southern restaurateurs said their black customers give for eating vegan, even if they don’t embrace the diet at every meal.

“It’s not cool to be unhealthy anymore,” she said. “People are dying from preventable diseases.”

Rates of diabetes and high blood pressure in the United States are higher for African-Americans than whites, according to data from the Center for Disease Control and Prevention. Both can be managed with lifestyle changes, said Molly Kimball, registered dietitian with Ochsner Fitness Center in New Orleans.

Kimball cautions, though, that a vegan diet is not necessarily a healthier diet. Vegan food can still be high in salt, sugar and refined carbohydrates.

“When you look at the type of vegan diet, is it heavy in plants? Not all vegan diets are. I mean, you can have Doritos, Oreos and Skittles and they’re vegan,” Kimball said.

“When we go to a restaurant and there’s any level of wellness conversation going on, I think that’s an accomplishment,” she said.

LOS ANGELES (AP) — Will Smith says he was “humbled and honored” after rapper Joyner Lucas released a tribute ...

Rosario Dawson relishes being the lead on new TV drama

NEW YORK (AP) — Rosario Dawson has graced both the big and small screens, in everything from dramas to comedies ...

WASHINGTON (AP) — When it came time to heave the largest aid package in U.S. history over the finish line, ...

Couples in quarantine: Stress, anxiety, fear of the unknown

The 60-something husband works in the food industry and still insists upon leaving every day for work, saying he ...

WASHINGTON (AP) — The Navy, the military service hit hardest by the coronavirus, scrambled Friday to contain its ...