Apple: ‘Yarger told me to lie’ 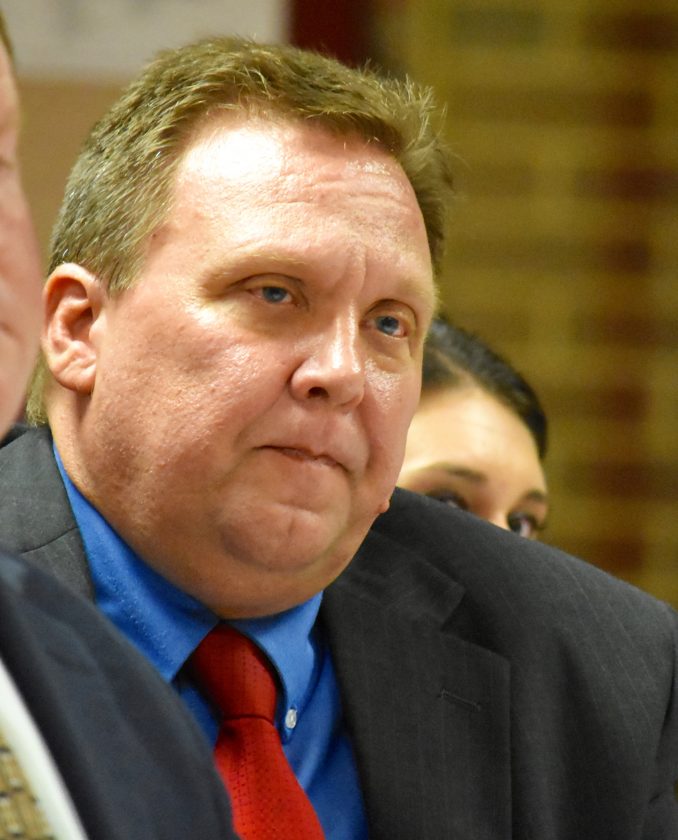 Sentinel photo by MIKE GOSS
Former Juniata High School principal Edward Apple listens to the testimony of Juniata County School District Solicitor Scott Etter during a due process hearing Wednesday night at Tuscarora Junior High School. The hearing was the third in a series of proceedings to help the school board determine whether or not to terminate Appleás employment with the district.

Juniata County School District’s Board of Directors heard testimony from Apple and District Solicitor Scott Etter Wednesday during the third day of a due process hearing held to determine whether to retain Apple’s employment with the district.

Apple is currently on suspension without pay after receiving a statement of charges for taking steel tables from the now-closed Lack-Tuscarora Elementary School to his private hunting grounds on New Year’s Day to be used to process deer and for misconduct for using school district money from a “slush fund” to purchase a birthday lunch – which included alcoholic beverages – at the Red Zone, Mifflintown, during work hours.

The hearings will result in a board vote to determine whether to terminate Apple’s employment.

Apple, who has been employed with the school district for nearly 20 years, testified that Keith Yarger, former Juniata County School District superintendent, sent him a text message Jan. 1, asking him to go with him to Lack-Tuscarora Elementary School to look in classrooms to see what items could be of use in other schools.

Apple said he arrived at Juniata Elementary School around 2:30 p.m. and that he and Yarger took the school district’s truck to Lack-Tuscarora.

At the time, the district was in the midst of moving furniture and other items as part of the elementary school consolidation. Lack, at the time, had just been abandoned for educational purposes and there were a number of items that needed to be moved.

Apple testified that he noticed a number of items including cabinets and shelves that could be used elsewhere.

In the school’s kitchen, Apple said he and Yarger removed two stainless steel tables that day, with the help of custodians, and a third was removed without him present.

Apple testified that the tables would work well for the booster clubs, stating that he had heard complaints about the countertops that were currently being used.

Apple testified they also took a meat slicer and pots and pans that he thought could be used for the booster club at Juniata High School.

Apple testified that neither he, nor Yarger, had a key to put the items in one of the school buildings for storage at the time.

Apple also testified that Yarger talked to him about wanting to use the steel tables to cut and process deer.

Apple testified that the two took the tables to his hunting land, then drove back to Mifflintown and put the meat slicer and pots and pans in his car because he did not have a key to the school buildings on him and there was no where else to put them.

In mid-January, Apple said the tables, meat slicer and pots and pans were then moved to a shed at his home and were returned to the school district at the end of January.

Apple testified that he told Etter, when interviewed on Feb. 4, that Yarger wanted to use the tables as “meat tables” and that Apple told him that he wouldn’t use them for those purposes.

Apple stated that he sent an email to Etter with an inventory list the next day with items that he had moved. He testified he wanted “to be as complete, honest and forward as possible.”

When questioned, Apple said Yarger told him to lie regarding what he intended to do with the tables. “I told him I wasn’t going to lie for him.”

Apple also testified that he told Etter that he “couldn’t use them as ‘meat tables.'”

During Etter’s cross examination, he described the text received from Apple on Feb. 5, which included photos of tables, chairs and other items as “cryptic.” The message was followed by an email that included an inventory of items he had moved as part of the consolidation, which included the three stainless steel tables.

Etter testified that he did not communicate with Apple again regarding the investigation until Feb. 11, when he stated that his job was secure, but he wanted to discuss sanctions the board wanted to put in place.

Etter testified that Apple specifically told him that he intended to use the tables as “meat tables” on his private hunting land.

At that time, he said he did not feel taking the tables would be grounds for dismissal and that at the time, he was unaware of any other wrongdoing.

“I feel he fell under the influence of someone who was not particularly smart about what he was doing,” Etter said, referring to Yarger.

As the result of a lawsuit filed in June by Apple’s attorney, a court order found that board members Amy Wagner and Danny Snyder could not sit on the board in judgment of Apple, but could be subpoenaed to testify.

Apple’s testimony will continue at 7 p.m. Aug. 27 at Tuscarora Junior High School, when the next hearing will be held.