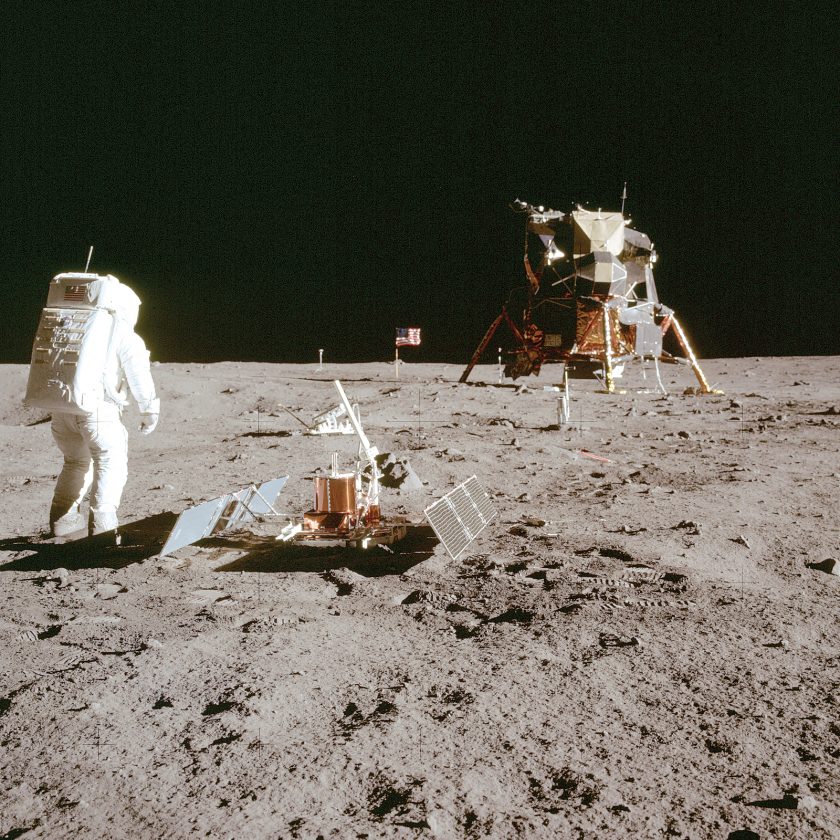 In this July 20, 1969 photo made available by NASA, astronaut Buzz Aldrin Jr. stands next to the Passive Seismic Experiment device on the surface of the the moon during the Apollo 11 mission. (Neil Armstrong/NASA via AP)

LEWISTOWN — Fifty years ago today in 1969, millions gathered around television sets to watch as astronauts Neil Armstrong and Edwin “Buzz” Aldrin, landed the Apollo 11 Lunar Module Eagle on the surface of the moon.

There were many memorable moments during the 21 hours and 36 minutes the astronauts spent on the moon. Armstrong declaring to NASA’s mission control that “the Eagle has landed” to when Armstrong uttered the famous words “That’s one small step for [a] man, one giant leap for mankind.” while stepping off the module ladder to the iconic image of the pair planting the U.S. flag in the moon’s ground.

Like most around the world who were alive at the time, plenty of area residents remember just what they were doing and thinking when it was unfolding.

“I just remember being in awe of it.” John Mannino said, “I remember watching it on television and going like ‘Oh wow this is really happening … is this for real?’ It was quite a feat.”

Like Mannino many who watched the broadcast of the Apollo 11 mission did so with family.

“I remember it was in the middle of the night.” Bob Knepp said, “But we stayed up that night and watched it. It was really something.”

Ken Furner was on vacation with his family when he watched the broadcast.

“I had three daughters and we took them to Florida and we were in the motel down there when it happened.” Furner said, “My wife stayed up to watch it and then got me up when it occurred.”

“It would’ve been just before I went into the U.S. Navy.” Allen Mengel said, “I can just remember Walter Cronkite did such a great job with that broadcast. Just everybody was on the edge of their seats and waiting until they came down I think we were all gathered around the TV. Might of been a color TV at that time. That was an exciting time when you could see that he (Armstrong) could put his foot down on the moon.”

Ray Hill watched the broadcast with family and friends at his home.

“We called people in that were very intent on seeing it” Hill said, “Well just the fact that with our scientific advances that we could get there with a vehicle and equip a person to be able to get out and explore a little bit. And then, best of all, climb back in and get back.”

Some, like Pat Cassner and Georgia Olson, had some concerns while the mission was unfolding on the television screen.

“We watched it on TV in the family room and made popcorn and watched it all night long.” Cassner said, “The whole family watched it. I just thought it was scary. I thought ‘Are they gonna get back?’ I also remember when they were docking thinking ‘Oh my God, I hope that thing docks.'”

Olson watched with her parents and sibling.

“I thought ‘Oh God please help them get home safely.’ I remember us holding our breath as he (Armstrong) was coming down the steps. I was like ‘Oh my gosh, it really happened.’ I never would have thought that.”

The moon landing was a historic event that was not only celebrated in the United States, but all over the globe. Cathy Clark, whose husband was in the U.S. Air Force at the time, was living in northern Japan.

“We didn’t have a lot of TV but we did watch it in the evening.” Clark said, “We probably didn’t see it live but we did watch it. The one town had a festival around that time with all kinds of decorations crossing the street. One was decorated with the space capsule and the letters USA. There were all kinds of decorations celebrating different things, but I remember that was the biggest one. It hung clear down to the street.”

For former teacher Ann Dunmire, who was a junior in college at the time, the landing was one of inspiration.

“Neal Armstrong’s one step comment, that resinated because you can look at the earth and say ‘why can’t we all get along?’ ‘Why don’t we get together?'” Dunmire said. “I think that had a lasting influence on me and the peace movement. For me it did.”

NASA’s moon missions also left some with a lifelong curiosity for space exploration.

“I would’ve been 16. It was in the evening and the basement was dark. I had otitis and my ear hurt.” Barb Noerr said, “Up to that point, you know, I was coming up through elementary school so there was Weekly Readers. And, of course, there was Gemini and then there was Apollo and this was finally Apollo 11.

“The Weekly Readers, I had cut out all the stuff from the Weekly Readers and made a whole scrap book of all this space stuff,” she continued. “I have quite a collection of space books now. It intrigues me.”