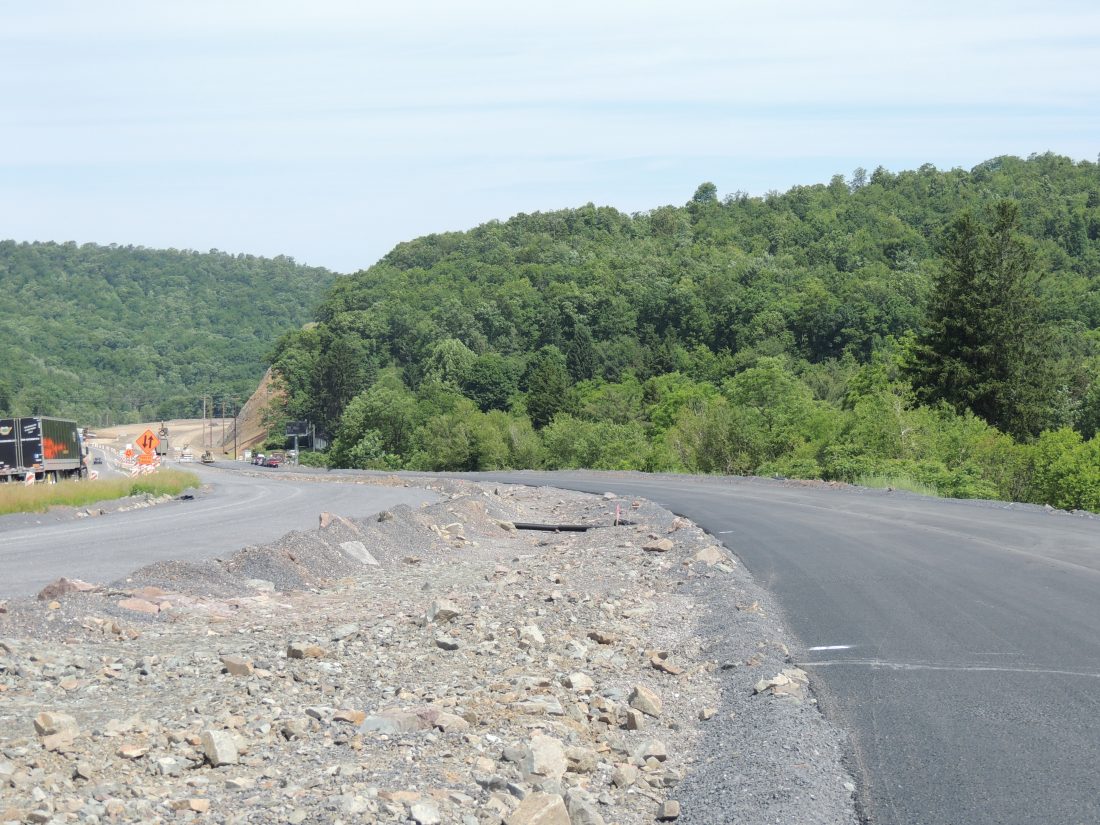 Sentinel photo by MEREDITH PEACHEY
By mid-September, the Pennsylvania Department of Transportation Potters Mills Gap project will have SR-2015 paved, on which traffic will be diverted so the new four-lane 322 highway can be completed. Construction Manager Greg Sidorick said the project is still on schedule, however, Marla Fannin, media contact for PennDOT District 2, said long traffic delays are projected from June 17 to 28.

Marla Fannin, media contact, and Greg Sidorick, construction manager for PennDot District 2, said travel will be reduced to one lane as utilities are moved from one side of the road to the other.

Sidorick said three utilities need to be moved so the retaining wall, which will ultimately separate the split-level highway and the local road, can be completed. Fannin noted utility work will begin Monday and continue to June 28. From 9 a.m. to 5 p.m., either a construction worker or an automated flagging system will stop oncoming traffic and direct opposite moving traffic along one lane, with one to two hour delays anticipated. Fannin said the time frame was chosen because there are fewer large-scale events scheduled and local schools are done for the summer.

“Anytime we detour or flag traffic, we’re doing that in the interest of public safety,” Fannin said, adding that drivers are encouraged to consider alternate routes and to utilize 511PA, a free, 24-hour service that provides traffic delay warnings, weather forecasts, traffic speed information and access to more than 950 traffic cameras.

“We hope the delays will be minimal,” Fannin said.

Brent Lykens, PennDOT construction services engineer, said he especially hopes that for the next two weeks, commercial vehicle and tractor trailer drivers will consider taking U.S. 11 or U.S. 15 to Interstate 80 or take U.S. 22 to PA-453. He also encourages passenger vehicle operators to opt for PA-655 to PA-305 to PA-26.

Today and Friday, drivers can anticipate 15-minute stops in each direction for slope excavation work on U.S. 22, between PA-144 and Decker Valley Road, according to a recent PennDOT news release. Furthermore, within the crossover from Decker Valley Road to Sand Mountain Road, there is a 14-foot width restriction for westbound traffic and a 15-foot width restriction for eastbound traffic, which will be in place through September. Short-term blasting operations are also possible, which could make roadway flagging necessary. Drivers are encouraged to be aware of off-roadway work and construction vehicles entering and exiting U.S. 322 through the Potters Mills area.

Sidorick said the current, two-lane U.S. 322, soon to be called SR-2015, is scheduled for completion and use by mid-September. At that point, traffic will be diverted onto SR-2015 so the new four-lane U.S. 322 highway can be completed. Sidorick also said approximately 80 percent of the excavation and 40 percent of the overall project is completed to date.

Lykens said the end result of the project will look a lot like the Lewistown “narrows,” with SR-2015 as a lower third level. He also noted the goal is to have the highway and local road both ready for travel before the winter in 2020.

LEWISTOWN — Despite the complications the social distancing protocols have caused the Mifflin Juniata Regional ...

From staff reports LEWISTOWN—One person was found dead on Wednesday night by crews who had been searching the ...