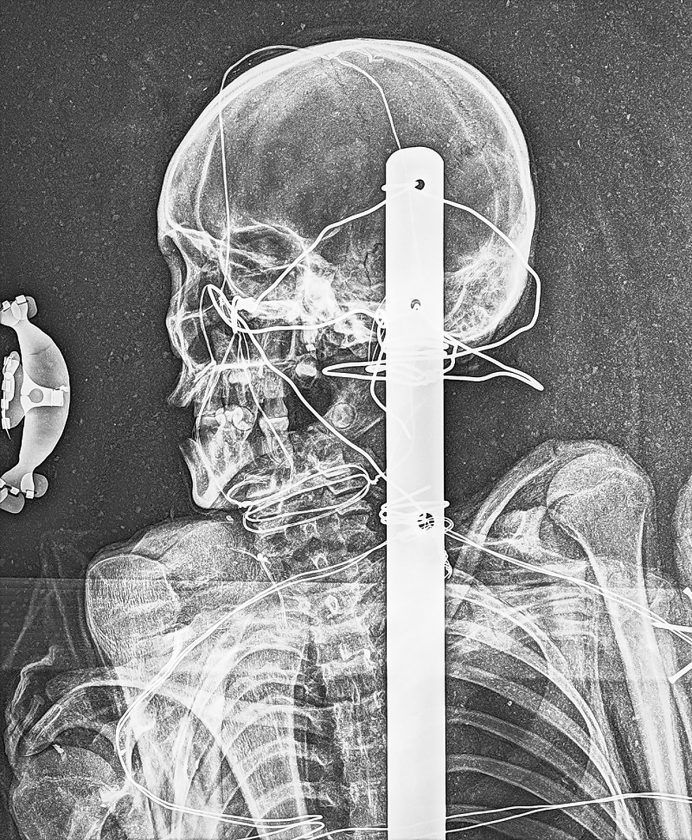 LEWISTOWN — X-rays are not uncommon, but set of bones recently scanned could be considered more unusual. A Peruvian mummy, dated between 800 and 100 B.C, was scanned at Geisinger Community Medical Center in Scranton last month, so that Dr. Dana Jackson, forensic and diagnostic radiologist with Geisinger-Lewistown Hospital, could co-examine the remains and provide details to the Everhart Museum about the artifact; details which would otherwise not be knowable simply by observation.

Jackson said that, because GCMC is located across the street from the museum, the executive director approached Dr. Scott Sauerwine, GCMC medical director of radiology, to scan the mummy for further examination. The mummy was sealed in a glass case, so the artifact could not be scanned via Computerized Tomography, however Sauerwine was able to take several images with the X-ray machine, then send the images to Jackson, one of only a few forensic radiologists in the country and the only one on staff with Geisinger.

“Evaluation of the mummy was akin to investigating a detective mystery,” Jackson said. “It was fantastic and very exciting. Dr. Sauerwine and I wanted to make sure the evaluation we gave was as comprehensive as it could be.”

Jackson said by reviewing the images, he could determine the sex of the mummy, as well as approximate age, height and other details. The arrangement and condition of the teeth, as well as the bony structure of the mummy determined an approximate age of 16 to 19 years at death. The shape of the eyes and eyebrows and the distance between the eyes determined the mummy was male. The length of the right femur estimated his height was approximately five feet. Jackson also said he was able to determined the decedent had possible bone nutrition deficiency by noting abnormal calcification. Jackson also stated that the mummy was wrapped so tight that the linen made an impression on his knee.

Jackson said the evaluation and conclusion process took six hours between he and Sauerwine.

“Sharing and discussing our findings with each other, I believe yielded a comprehensive, respectful and significant evaluation of the decedent,” Jackson said.

The mummy was on display at the Everhart Museum from March 9 to April 7, said a museum staff member. According to a recent press release about the exhibition in which the mummy was included, a Scranton dentist donated the mummy to the museum in 1923, after he inherited the artifact from his father, who had “a stint in Peru.” The mummy was identified as belonging to the Paracas culture, a people group dating back to 800 to 100 B.C. in South America.

LEWISTOWN—Members of the Mifflin County Planning Commission met Thursday afternoon to discuss a subdivision and ...

LEWISTOWN – Mifflin County School District has been awarded $495,000 in school safety and security ...

LEWISTOWN — Four area school districts have been awarded School safety grants by the Commonwealth of ...

LEWISTOWN — The Sentinel is seeking local residents who have questions about their child’s health care for a ...