Volunteers work to feed others 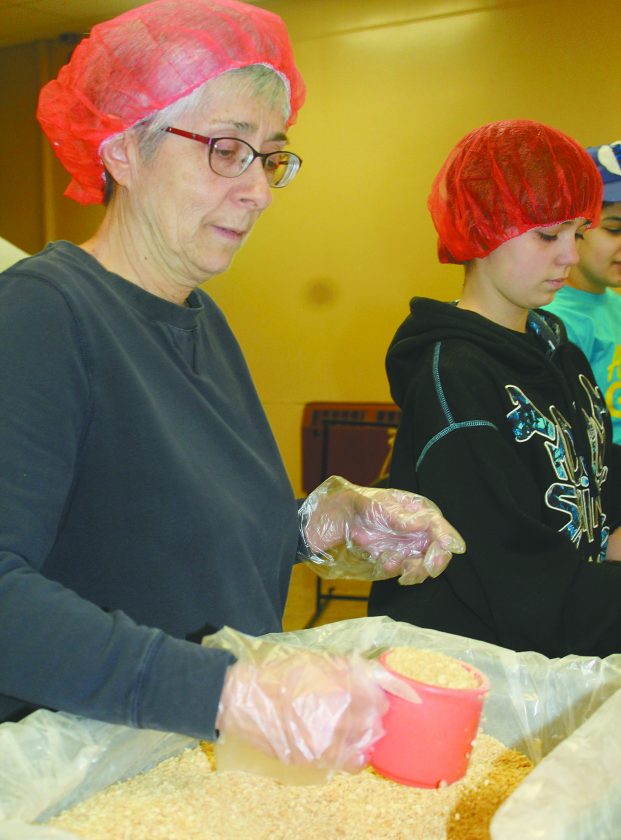 This was not a party.

It was a mission.

Aldersgate United Methodist Church hosted “Rise Against Hunger” Saturday morning at the fire hall. The two-hour event included 65 volunteers from the community who helped bag rice and dried vegetables to feed the hungry in another part of the world.

Michelle Holler, missions committee member for Aldersgate UMC, said the church served with this mission organization two years ago. Pastor Stephanie Rupert who was with the congregation at the time introduced them to the concept.

When the missions committee expressed interest a year ago to recreate the effort, current pastor Denise Haskins was in favor.

Holler said the church had to raise $3,500 to complete the mission and purchase all of the necessary materials.

A year of fundraisers made this happen, she said.

A series of stations was set up inside the fire hall. Individuals were scooping and bagging food, weighing the contents, and boxing them for shipping.

Greg Guiterrez opened the morning on behalf of “Rise Against Hunger.”

“This goes at a fast pace,” Holler said, “which makes it fun. Everyone is on a high knowing we did something good.”

Following Guiterrez’s pep talk, a gong at the front of the room was struck. Every 1,000 bags of food completed received a gong strike. Bass thumping party music rang out through a speaker system, motivating the crew to keep moving.

This event in Juniata County is the only one in this area so far this year. Other areas to host the program include Carlisle and Hershey.

Holler said if the church can raise another $3,500 they will do this again.