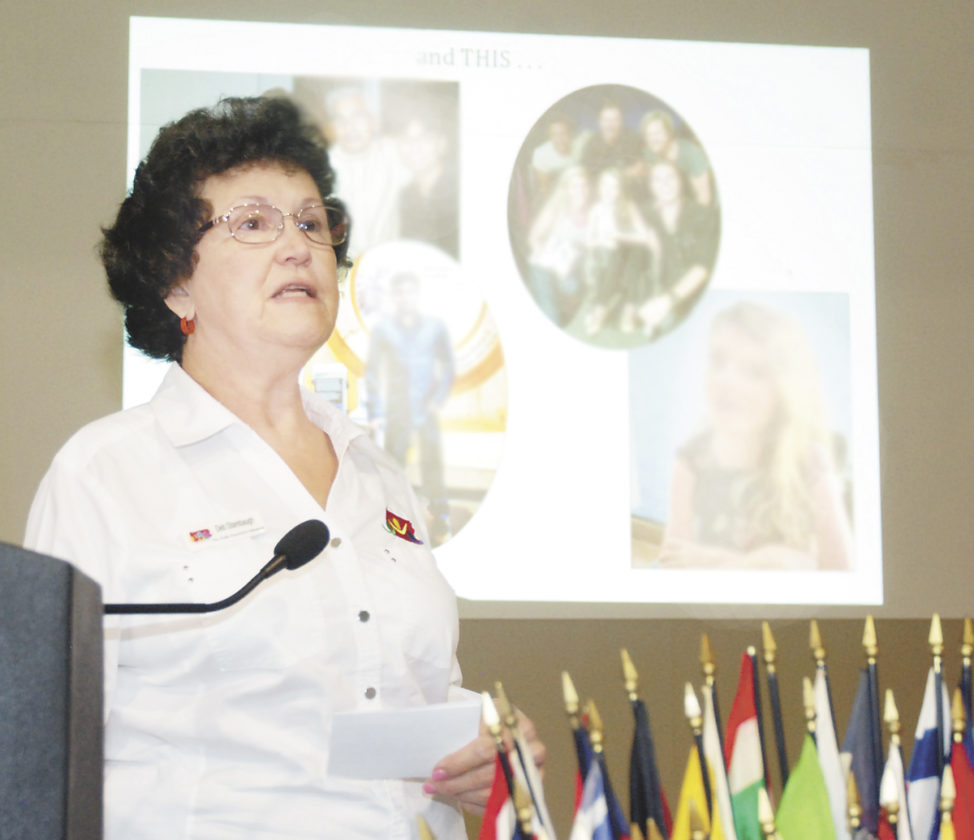 Sentinel photo by BUFFIE BOYER
Deb Stambaugh, representing the Pennsylvania Polio Survivor’s Network, explains the effects of polio as pictures of polio survivors are featured during a slideshow Tuesday at the Rotary Club of Lewistown’s meeting at Rec Park Community Center.

LEWISTOWN — To recognize Rotary International’s initiative to eradicate the polio virus from the world, the Rotary Club of Lewistown hosted the Pennsylvania Polio Survivor’s Network and polio survivors to its Tuesday meeting at Rec Park Community Center.

Deb Stambaugh, representing the polio survivor’s network, spoke about the truths associated with the disease.

“There are 20 million polio survivors in the world,” she said. “One million plus are in the United States.”

Of those survivors, she said 75 to 80 percent will develop post-polio syndrome in their lifetime.

“People think it’s done and over,” Stambaugh said. “Polio attacks not once, but twice.”

Post-polio syndrome (PPS) refers to a cluster of potentially disabling signs and symptoms that appear decades after the initial polio illness. Stambaugh said a vast majority of paralytic and non-paralytic survivors report PPS 30 to 40 years later.

Some common signs and symptoms include, progressive muscle and joint weakness and pain, fatigue, breathing and swallowing problems, muscle atrophy, sleep-related breathing disorders and decreased tolerance of cold temperatures. According to the Mayo Clinic, PPS tends to progress slowly, with new signs and symptoms followed by periods of stability.

With Rotary’s support, Stambaugh said she is optimistic the mission to eradicate polio will be successful. Vaccinating children here and in foreign counties is imperative to the success of this mission. She said children in foreign countries are so afraid of polio they will get in line a second time trying to get more of the vaccine.

“Polio is only a plane ride away,” she said. “Get your child vaccinated.”

The “Zero Matters” initiative, to have no new cases of polio in the world, is important to stop the risk of reinfection and outbreaks across the globe.

“Once zero happens, it will take a full generation of polio survivors for post-polio syndrome to be gone,” Stambaugh said.

Stambaugh recounted her experience as a four-year-old child when she contracted the virus and the time she spent at the hospital.

“I was in the hospital for six months and only saw my family through a window,” she said.

She is thankful she was never in an iron lung, but recalls the hot blanket and whirlpool treatments she received.

Other survivors who attended the meeting, recalled their similar experiences as children in the 1950s when they contracted the virus and various challenges they are facing now as they are experience post-polio syndrome.

During the meeting, local Rotary member Dave Borland was pointed out as being a Polio Pioneer. Borland said he was one of 200 volunteers who participated in the largest clinical trial in history, led by Dr. Thomas Francis Jr. While a student at the University of Pittsburgh, Borland received a series of shots as Francis worked to develop a polio vaccine. Francis’ work was successful and the vaccine was then administered routinely in 1955.

“I happened to be in the right place at the right time,” Borland said.

The Rotary Club in Lewistown is foregoing its next meeting and the money that members would normally use to buy lunch will be donated to the Pennsylvania Polio Survivor’s Network.

For more information on polio or the Pennsylvania Polio Survivor’s Network, visit www.papolionetwork.org or call Stambaugh at (717) 969-5049.