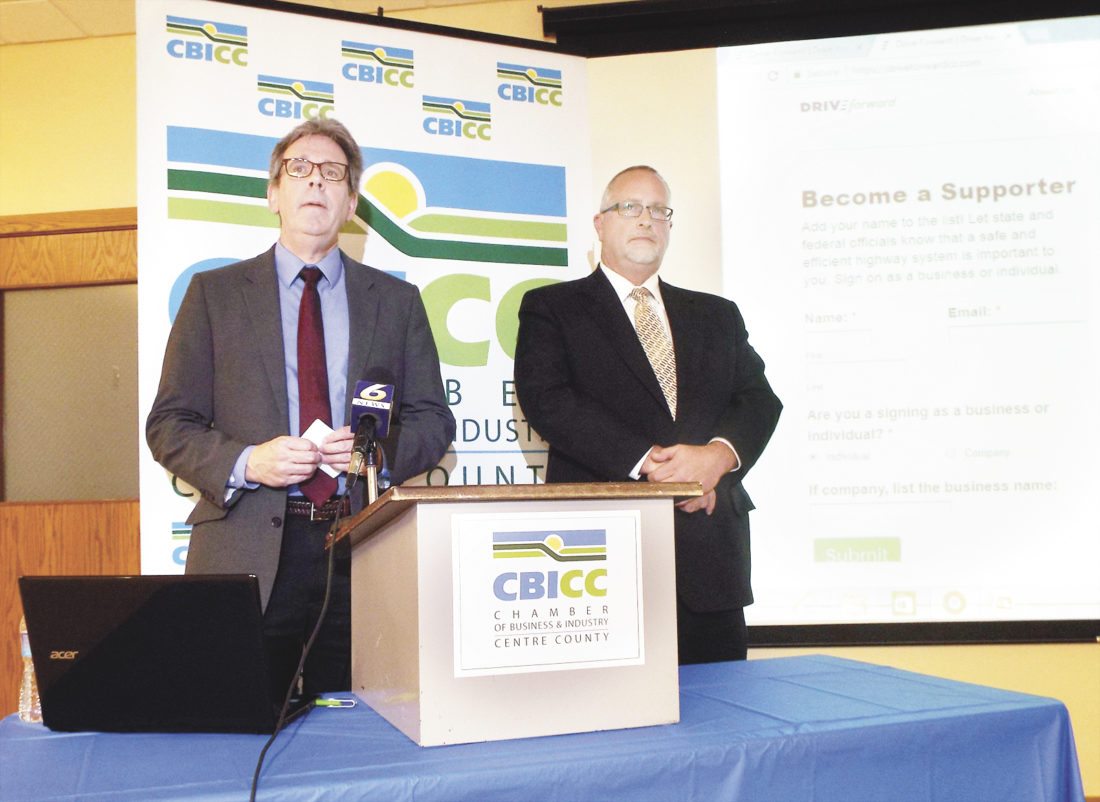 STATE COLLEGE — The Chamber of Business and Industry of Centre County, along with the Centre County Metropolitan Planning Organization and Pennsylvania Department of Transportation on Monday announced joint support for the construction of a new high-speed interchange between I-99 and I-80 to replace the Bellefonte interchange.

The announcement was made at the CBICC office in State College, where representatives from those agencies said they plan to apply for a $45 million federal Infrastructure for Rebuilding America Grant that would make road improvements possible.

CBICC President and CEO Vern Squier said the high-speed interchange is important to maintain, not just for individuals who are traveling to Penn State for business or for leisure, but also because it is a popular area for trucks to transport goods. “Everyone is affected” by the roadway, he said.

Creating a safer and more efficient interchange will be a “great commitment over time,” Squier said.

Jeff Luck, chairman of CCMPO, said it is important to apply for grant funding while it is available.

“This is probably the last time in this generation that we will have the opportunity to complete this project … we’re really hopeful this will move forward.”

Luck said if the project is approved for federal funding, the MPO intends to devote a significant amount of their funding — about $6-7 million –toward the project.

“Our goal is to position projects that are irresistible to complete,” he said.

George McAuley, deputy secretary for highway administration for PennDOT said he expects the grant application will be submitted by the end of the week.

The high-speed interchange is high on the local priorities, McAuley said, but “the process will be very long and challenging” and is not likely possible to fund without federal support, he said.

While the project is still in “concept stages,” McAuley said improvements will make the interchange safer and more efficient for the movement of goods and motor vehicles.

Also during Monday’s event, Squier announced a campaign, “Drive Forward” that the coalition started that individuals can use as a resource and to show their support for the project.

The Drive Forward campaign and the coalition are also supporting improvements to the remaining two-lane stretch of U.S. 322 from Potters Mills to State College.

The campaign will deliver a strong, unified message as a community to PennDOT and federal officials in Washington, D.C. that the I-99 and I-80 high-speed interchange and U.S. 322 improvements are essential to safe travel and efficient commerce in central Pennsylvania.

Penn State University, private-sector businesses including Glenn O. Hawbaker, Inc. and First National Bank — and numerous other concerned stakeholders — are among those initially backing the effort.

LEWISTOWN — The Mifflin-Juniata Concert Association’s final performance of the current season — Sail On, a ...

Japan to declare state of emergency for Tokyo, other areas

After virus fades, service industries may be changed forever