BMS team was only group to participate from Mifflin County 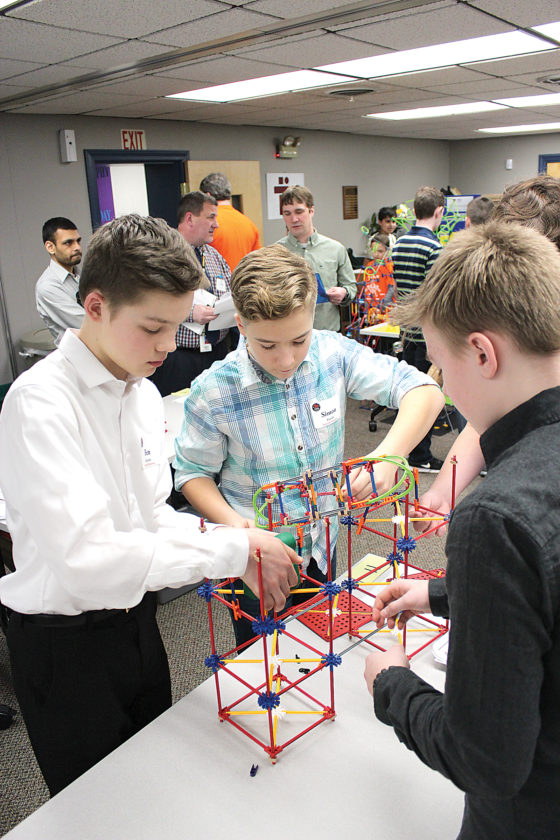 McVEYTOWN — As many as 40 people can find a seat on “The Flying Squirrel,” a spinning thrill ride dreamt up by four Belleville Mennonite School students.

Using K’nex building pieces, students were challenged to design an amusement ride for a new park that is making “green” energy a priority.

Early in the design process, the boys said they considered building a carousel but thought that might be too ordinary. Then, they thought a roller coaster might do the trick — but many other students might think of that, too. The solution was a high-thrill spinning experience with the benefit of portable travel.

Peachey said their ride was inspired in part by the classic tilt-a-whirl.

Snook said the team took the idea of spinning on a horizontal plane and switched it up a bit.

“Well, what if we took that idea and made it go vertical?” he said.

Hartzler said the overall design is simplistic, but the team felt that was an advantage over some of the more complex, expensive proposals from other teams.

Peachey said the ride is powered by solar panels — one to power two motors required to make the ride run and a backup for security.

The sixth to eighth grade division of the competition also required students to include a price estimate based on research into the materials needed to make their ideas reality. The boy said their ride would cost $9,735, and its design is portable, which they thought could be an advantage over others.

The BMS students took only 35 minutes to build their K’nex prototype Friday morning. Students had three hours total to work before judging.