Tombstone, Arizona allows visitors to travel back in time 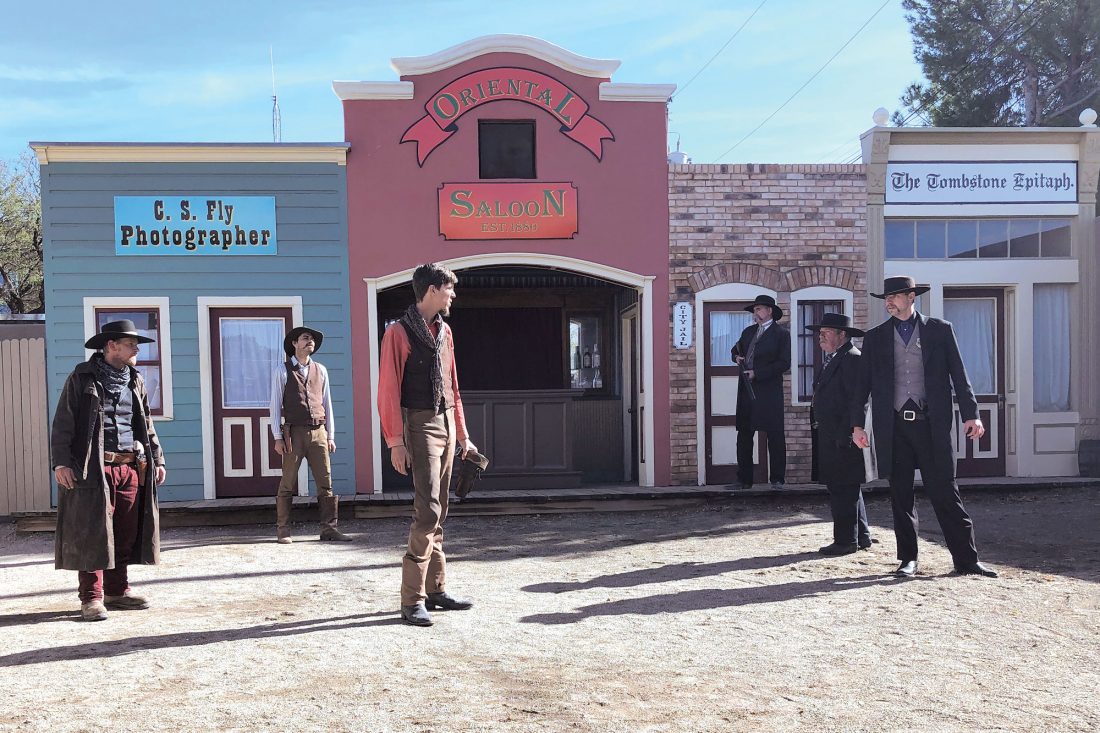 AP photos
Actors are seen reenacting the events that led to an 1881 shootout in the town of Tombstone, Ariz. that left three dead and became one of the most famous gun battles in the Old West. Numerous books and movies have been based on the shootout. Tombstone was founded and flourished in the late 19th century after large amounts of silver were found in the area.

And several more “bangs!” — the gunshots in this reenacted shootout happened so quickly I couldn’t keep count.

“That was it,” said the actor playing lawman Doc Holliday at the OK Corral’s several-times-a-day show about what may be the most famous gun battle in the Old West. “Over before it even started.”

Newcomers to Arizona, I had brought my wife and young children to Tombstone, about a three-hour drive southeast of Phoenix, to learn some of the state’s history. I figured cowboys and gun battles would be more interesting to my 8- and 9-year-old boys than museums.

But the shootout was over so quickly I couldn’t help but ask myself: “Why is this a big deal?”

There are numerous movies and books about this event, and the name “Tombstone” may be one of the most recognizable in the world. But only three people were killed in the 1881 shootout, which seems quaint in today’s world of mass shootings. And when you see the reenactment, you couldn’t be blamed for thinking back on those old movies, with their drawn-out gun battles and dashing horses, and concluding they were a lot of cow dung.

A quick recap of the basic conflict: A group of armed outlaws, called cowboys, shoot it out with the town marshal and a handful of other policemen, culminating a feud that was part personal, part legal, and spoke to the future of a town.

Tim Christie, the actor playing Holliday, said much of the intrigue comes from digging into the characters and realizing there were no good guys.

“They were all bad guys. Everybody had an agenda,” said Christie, who is also the show manager and director.

Tombstone today is a mix of authenticity and tourism with a heavy dose of cheese. Besides the OK Corral show, there are other reenacted shootouts in the streets. In the old part of town, the storefronts and dirt streets look like they did when the town was founded and flourished in the late 19th century.

“This all looks like a movie!” said my 9-year-old as women in long, full dresses and men with cowboy hats and spurs waddled past us.

Shops sell leather boots, lassos and toy guns. Children “pan for silver” with bags of dirt mixed with shiny rocks. Large and colorful carriages whiz by, and there are several saloons to explore along with “cribs,” where prostitutes lived and worked.

Jeremy Johnston, historian for the Buffalo Bill Center of the West, in Cody, Wyoming, said the glamorization of the town and shootout began in the 1930s after Stuart Lake published “Wyatt Earp: Frontier Marshal,” a largely fictional biography that cast Earp as a courageous lawman. That led to several movies and television series in the decades to come.

Johnston said the shootout was big news locally at the time, but there were so many other conflicts in the area — Apache Indian wars, mining disputes, violent strikes — that it would have been one of many things.

The gun battle in Tombstone did not actually happen at the OK Corral, but in front of C.S. Fly’s Photographic Studio on Fremont Street, several doors down from the corral’s back entrance.

Popular culture has turned the shooting into “a story of good, solid citizens standing up to ruffians to build a good community,” Johnston said, adding that it “ignores many nuances.”

Dusty Escapule, Tombstone’s mayor and a fourth-generation resident, said the town is working to add attractions beyond the gun-slinging.

“The gunfights won’t be interesting to younger generations,” he said, adding that he has seen parents pull their kids away when a reenactment shootout begins because they don’t want them to see it.

That isn’t to say the town of 1,290 residents is moving away from its gun history. In some ways, it is further embracing it. In 2017, Escapule signed a proclamation declaring Tombstone “America’s Second Amendment City.” The measure was purely symbolic, as Arizona allows residents, and even visitors from other states, to carry concealed weapons.

“I wanted people to know we believe in the rights of citizens to bear arms,” said Escapule.

Ironically, one of the central disputes that led to the famous shootout was the contention by the lawmen that others, i.e. the cowboys, should not be able to carry weapons in town. Today, many shops have signs on the door saying, “No Guns Allowed Inside” (private businesses in Arizona can prohibit weapons on their premises).

One attraction that gives visitors a broad view of the town is Tombstone’s “historama,” shown at the OK Corral. Narrated by the late actor Vincent Price, it explains how the town sprang up and got its macabre name: Ed Schieffelin, a silver prospector, was told by a friend something to the effect that the only rocks he would find (in a territory with Apaches) would be his own tombstone. When Schieffelin filed his first mining claim in 1877, naturally he called it “Tombstone.”

Among other things, the historama recounts fires that destroyed the town and the rapid rebuilding after each blaze, which led to the moniker “The town too tough to die.”

If there is one thing in Tombstone that feels in line with all the Old West movies, it’s the landscape. The town, less than 50 miles north of the U.S.-Mexico border, is in the middle of a desert, with cacti, sage and dirt that swirls up in dust. The summers are brutally hot.

Visiting Tombstone, I understood why it captured the American imagination, even if its reputation was based more on imagination than history. There’s the harsh terrain, the lure of overnight riches for risk-taking prospectors, the battle against lawlessness.

And while gun-control issues might change how people view the Old West, the good-versus-evil narrative will continue to inspire.

It certainly did for Christie, the show director. Now 25, he began playing a younger cowboy in the show when he was 12.

“In my childhood, I dreamed of cowboys,” said Christie, smoking a cigarette between performances. “Now I play one in a show.”

Navigating garden catalogs to plan for the season ahead

As garden catalogs are piling up and online versions fill your inbox, your thoughts may turn to the growing season ...

Birds, bees and butterflies – oh my!

There is something very satisfying about watching a bee or butterfly move from flower to flower. Or seeing a ...

I was bitten by the gardening bug at an early age. Born into a farming family, it was only natural that I found ...

Juniata County librarian Vince Giordano wanted to improve online communication with customers, and moved from a ...

MIFFLINTOWN — There’s long been more than books to check out at the Juniata County Library — and Vince ...

What to know before laying down money for a mattress

Here comes Presidents Day, a time to celebrate Lincoln and Roosevelt — and blowout mattress sales. These ...