Mifflintown man goes along for the ride, 154 years later 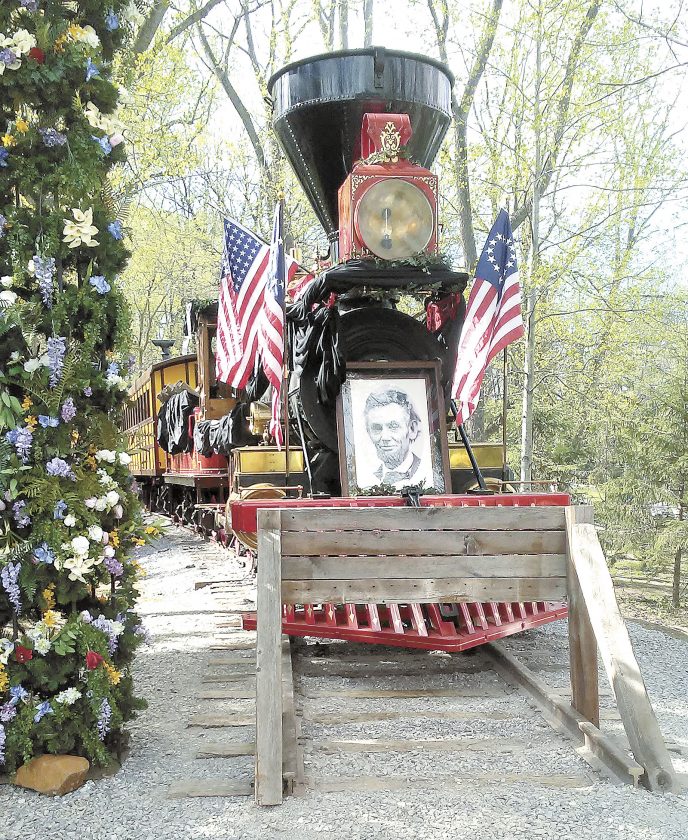 Photo submitted by DONALD ‘RED’ HUSLER
The replica Lincoln funeral train is on display at the Stone Gables Estate in April.

Although it’s been 154 years, the memories still lay fresh in the minds of many generations that followed the fateful event. On April 14, 1865, just a few days after the War Between the States had ended, our 16th president, Abraham Lincoln, while attending a play, the future of our nation would be forever immortally etched into history. Slain by an assassin bent on retribution and revenge, our president was murdered; he would die the following morning.

Preparations were made to take the president’s body back to his home in Springfield, Illinois.

A special locomotive and accompanying rail cars had been fitted for the president and first lady, Mary Todd Lincoln, to travel the country after President Lincoln’s second administration ended. He thought it to be too extravagant to use while the war was still in progress, so it would not be used at that time. His first ride in a car specially designed for traveling the Union, for which he is given credit for preserving, would now only carry his body home.

On the 154th anniversary of this event, an exact replica was made of the Leviathan Locomotive and of the traveling car, now the funeral car, of President Lincoln. The funeral car in 1865 would travel through Harrisburg on its way to Philadelphia. On an existing stretch of rail bed, new track has been laid and the replica train has found a permanent home right here in central Pennsylvania. Just outside the borough of Elizabethtown, on a 275-acre farm, sits the site of the train and the “Stone Gables Estate,” now home of the popular Star Barn.

On April 22, 2019, 29 Veteran Reserve Troops from 12 northern states, as well as two war correspondents, boarded the train to re-enact this historic event. Two of the soldiers on board were from Pennsylvania. One of these was Lt. Edward Brown, of the 148th PVI, the Centre County Regiment, who was transferred to the Veteran Reserve Corps after being wounded twice. The correspondents were Steven Diatz, portraying William Halliday, from the New York Herald, and myself, Donald Husler, writing for the local papers from Mifflin and Juniata counties.

I boarded the funeral train by way of the back platform, interviewed the sergeant in charge of the Guard Detail and the conductor. Many details of the train, I had not known before. As the train commenced its journey and rolled through the countryside, many mourners could be observed standing reverently along the tracks. As we approached the station near Elizabethtown, the many turned to thousands. All standing quietly with much respect watched as the trained passed so as to see their president. The occasion was quite somber. With band playing, the train stopped and the detail disembarked for the public to pass the president’s coffin, again with much respect and sorrow for our slain president.

After a short stay, the train proceeded on its mission to deliver President Lincoln to Springfield.

Although just a living history demonstration for our beloved President Abraham Lincoln, the experience is one that I shall long remember. God bless the United States of America.