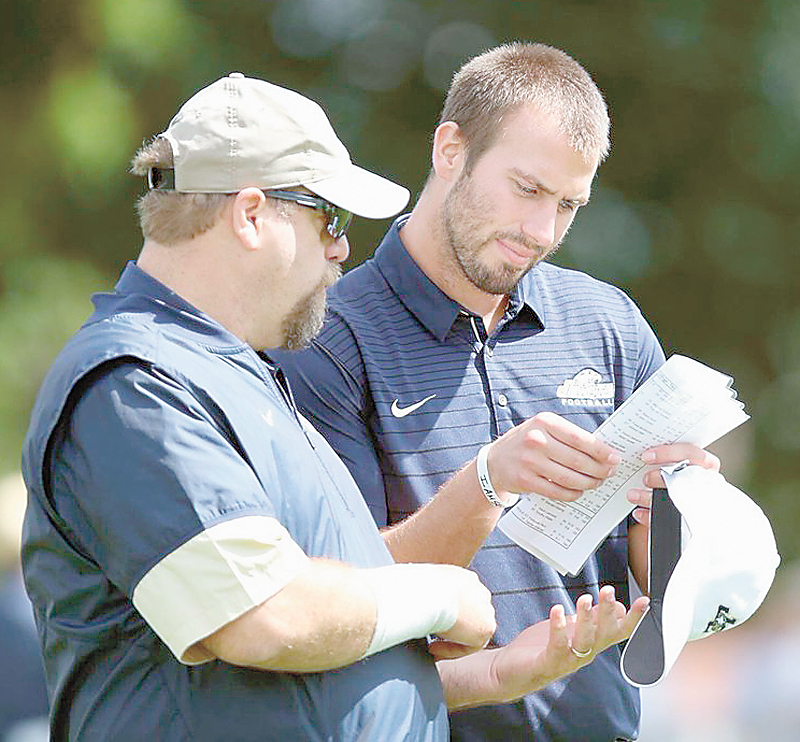 Today, Hepner works with defensive line as an assistant coach for Juniata College, which travels to F&M Saturday after a season-opening loss to Grove City.

“We have always had a good amount of local talent at Juniata College on the football team and in many other sports,” said Hepner, a social social studies teacher at Mifflin County. “I enjoy seeing their faces on the field of play and around campus. I feel it brings a sense of calmness to a possible chaotic time when they see a familiar face.”

With 10 players on this year’s Juniata College football from Mifflin and Juniata counties, Hepner and the Eagles should have plenty of Zen moments. Also, Vince Inzerillo, who coached 15 years in Mifflin County programs, is in his fifth year as an assistant coach on the Juniata College staff. Inzerillo works with the tight ends.

“We run into each other during breaks either at Wal-Mart or restaurants or even local fairs,” Hepner said of the locals on the Juniata roster. “I know many of the families of these athletes both at Juniata County and Mifflin County.

“These young men make our areas proud through their efforts and conduct on and off the field,” he added.

Lauver, a 6-3, 219-pound tight end, finished last year with eight catches for 49 yards. He had three catches for 23 yards against Grove City, including a 26-yard haul, and also caught a two-point conversation that tied the game at 14-14 in the second quarter.

Junior Isaiah Wagner (Juniata) also hopes to make his presence known on defense. Wagner had five tackles in five games a year ago. He finished with three tackles and a pass break-up against Grove City.

After playing in four games last season and completing 10 passes for 95 yards, junior Tyler Clark (Juniata) is one of the Eagles’ options at quarterback.

One of the 6-2, 190-pound quarterback’s options could be junior Nathan Bargo (Mifflin County), who played in the opener but did not have any receptions.

Junior Fletcher Hart (Juniata), who saw action in two games as a freshman, sat out last season after suffering a leg injury. The 5-9, 190-pound Hart plays running back but is battling an injury.

Freshmen Bryson Clark (Juniata), Julian Jackson and Noah Wright (Mifflin County) are listed on Juniata’s roster. At 6-1 and 215 pounds, Clark plays linebacker, while the 6-2, 150-pound Jackson is a wide receiver and the 6-2, 170-pound Wright is a quarterback.

Clark registered five tackles against Grove City. Wright punted four times in the opener, averaging 36.0 yards including a long of 47.

The Eagles have a 13-game losing streak dating back to 2017.

Other area products on college football rosters this season include:

¯ Christian Benner (East Juniata), a freshman at Division II Lock Haven. The 5-11, 195-pound Benner is listed as an offensive lineman.

¯ Tatydum Fortson (Mifflin County) is a freshman at Division III Lycoming College. The 5-10, 210-pound Fortson is expected to play linebacker.

¯ Jim McLaughlin (Juniata), listed at 5-7 and 205 pounds, is a freshman at Division III Lebanon Valley College. He is expected to play fullback but did not play in the Flying Dutchmen’s 35-20 loss to Franklin & Marshall. Lebanon Valley visits Wilkes Saturday.

¯ Keiton Pollock (Mount Union) is ready to kickoff his senior season at Division III Allegheny College. The 6-5, 225-pound Pollock is an offensive lineman. Pollock switched from linebacker after his sophomore season.

¯ Chantz Swartz (Juniata) continued to rack up impressive numbers after a sensational sophomore season for Lock Haven. Now a redshirt junior, the 6-2, 215-pound running back carried the ball 126 times for 759 yards and five touchdowns a year ago.

¯ Jacob Yoder (Mifflin County) is a freshman at Division II Bloomsburg University. The 6-6, 300-pound Yoder is penciled in as an offensive lineman.

¯ Owen Zechman (Midd-West) is a freshman at the University of Delaware, which competes at the FCS level. The 6-4, 280-pound Zechman is listed as an offensive lineman.

NOTES: Rich Yahner, who coached at Lewistown in 2009, is entering his second season as the linebackers coach at Lafayette College, an FCS member. … Lewistown native Evan Dudick joined the coaching staff at Division II Millersville University as a wide receivers coach prior to the 2019 season. Dudick, a 2018 Shippensburg University graduate, most recently served as the receivers coach at Juniata College.