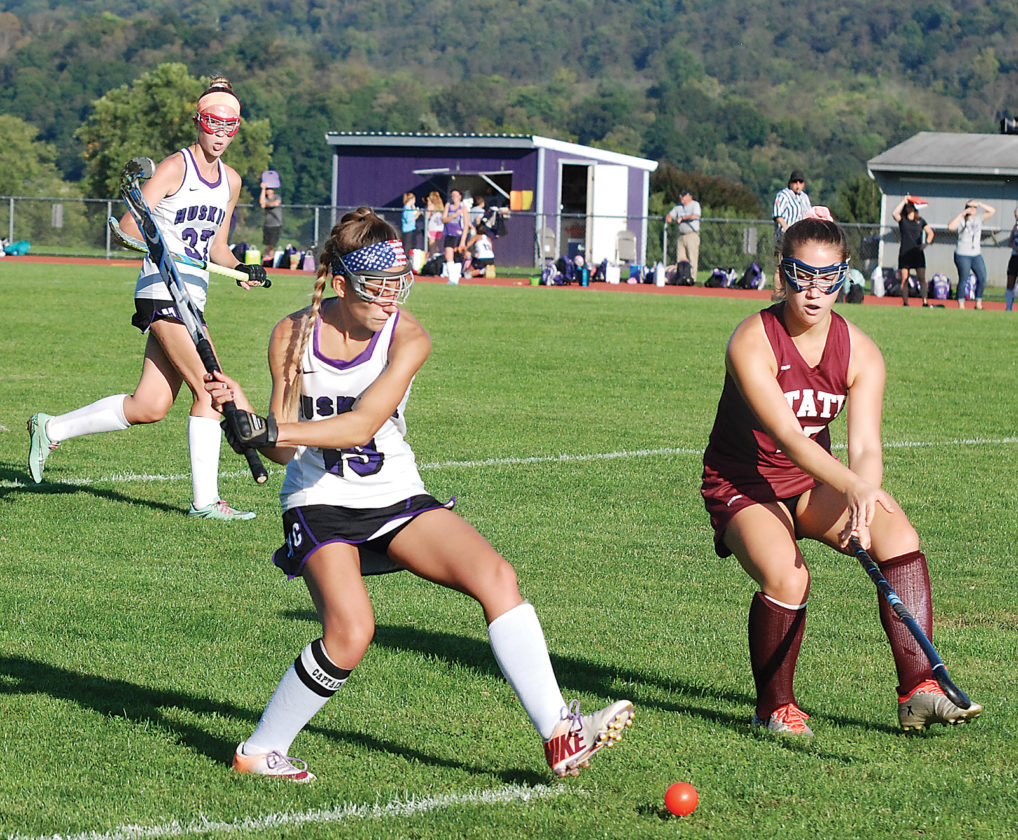 LEWISTOWN — The Mifflin County field hockey team was playing with enthusiasm in the first half of an all-or-nothing game that would decide its playoff eligibility.

The Huskies were moving the ball well and getting off shots, but couldn’t do anything with them.

Then State College took advantage of a scoreless tie and woke up in the second half, doing what the Huskies couldn’t do with their early chances: score.

That was the difference in a tightly contested 1-0 Mid-Penn Commonwealth Division game Wednesday afternoon.

With the loss, the Huskies (2-11, 1-7) can not qualify for the playoffs under the school’s three-tiered standard. It will be the first year since Mifflin County High School was formed that it will not be represented in the District 6 postseason.

As the Little Lions went on the march for much of the second half, the Huskies responded with tough defense. They didn’t allow State College to get a good, clear shot on goal.

That is except for Kelsey Love’s score 10 minutes into the half.

It wasn’t without controversy.

After being issued a card for dissent toward the officials, Love came back into the game and quickly made a difference for the Little Lions.

Following a foul call on the Huskies, Love got the ball and took a few steps toward the top of the circle and when she got there, got off a laser of a shot that went uncontested for the game’s lone goal.

The lack of pressure may have been caused by some misunderstanding that even had Mifflin County coach Courtney Kanagy upset at the end.

“The rule is 25 yards and above, you have to carry or pass it five yards before you can send it to the circle,” Kanagy said. “She tapped the ball — one little tap — and drove it straight in. She was inbetween the dotted circle and circle, and shot it as soon as she got to the circle and that’s not five yards.”

That lone score held up as, for much of the final minutes, the Little Lions were just taking the ball out to the edge and running time off the clock. The Huskies were often reminded to get more than one player in there to distrupt the game plan and setup the passing lanes that were available the first 30 minutes.

“We got scored on and then played defense and not much offense,” Kanagy lamented. “You have to play offense to score goals and I think we just turned it off offensively. They started playing the keep away game and kept us from scoring.”

State College edged out Mifflin County in both shots, 6-5, and corners, 7-6.

All five of the Huskies shots were taken in the first half.

The second-half goal may have taken a lot of the life out of the Huskies, but so too did a great scoring opportunity that ricocheted off the left goal post.

Keni Kahley got State College goalkeeper Grace Biddle to come out of goal just before she took a shot that bounced off the protective gear toward the left side of the circle where Ellee Garver was.

Garver had a wide open goal, but tapped it off the post and that allowed the Little Lions to get the ball out of the circle, ultimately taking away the best scoring chance the Huskies had all game long.

Kahley was seen everywhere on the field, distrupting everything State College attempted to do, but it helped having Maggie Solomon in the right place at the right time defensively all throughout the game.

Their play as well as the energy and enthusiams the team was in search of as time became a factor is something Kanagy would like to see more often and not so late in games.

“It should be a constant push,” Kanagy said. “We have to score. We can’t stand back and play defense. We have to get quick, free hits and we have to not stand around and dilly dally. We had to keep moving.”

LEWISTOWN — It was winner-take-all Friday night when two friendly foes took the field to battle for the Mifflin ...