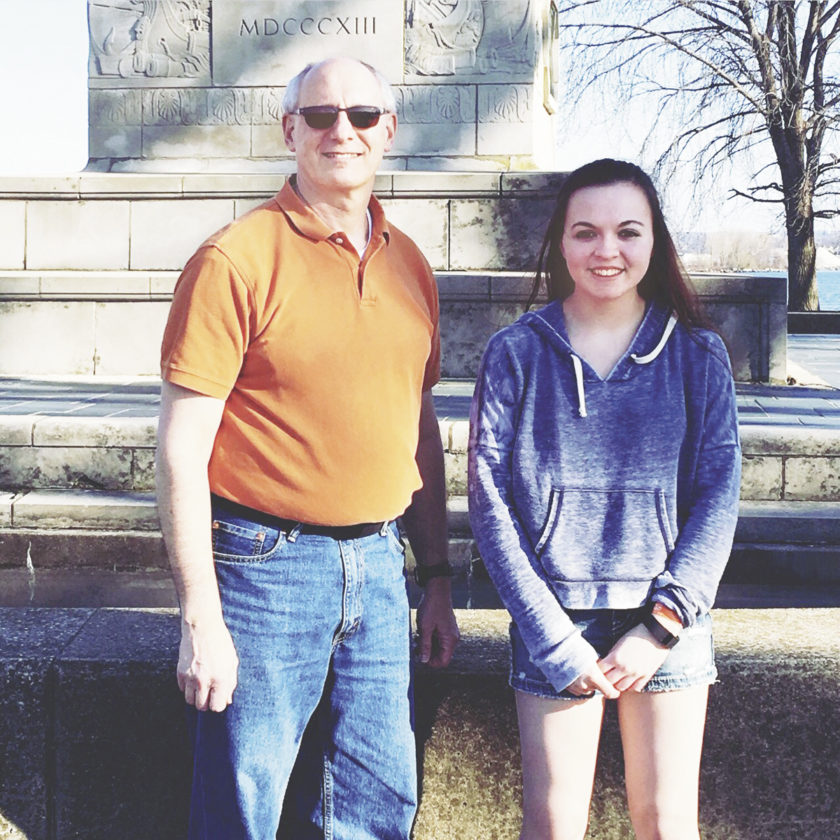 Author’s note: Life back in the 1970s was crazy. Bell-bottom jeans were a trend. Everyone wore tight flamboyant-colored pants and were seen drinking Dr. Pepper. This story takes place at Penn State University. My band director, Arthur Belfiore, was a freshman at Penn State in 1977. He was in marching band in high school and wanted to audition for the Blue Band. It had been his dream all of high school to march with them. I never knew how difficult it was to audition for the Blue Band. Arthur has been teaching music for almost 40 years, and I’m lucky to have been his student for five years of it. I look up to him as my mentor. I want to convey to the readers about how much I respect him. Also, I want Mr. B. to know how much I am going to miss him after I graduate next year.

On a hot summer morning, 18-year-old Arthur woke up with butterflies already jumping in his stomach. Today was the day, the day he had been excited but nervous for. Audition day. For the past couple months, he practiced every day. He practiced all of his scales thousands of times. Arthur had joined a community band in the next town over to prepare him for his audition. Being in the community band helped him be able to sight read music. There were over a hundred difficult marches in the community band folder. The worst part of the audition, where most people get cut, is during the sight read portion. He knew sight reading was an important part, because the Blue Band did a different show for each home game. They worked on three shows at a time. Arthur knew he wanted to be in the Blue Band since high school. The concert Blue Band came and did a performance in a theater in his hometown. He thought they were amazing and knew he would be a member one day. His band director was in the Blue Band; he was the main reason for Arthur wanting to join the band. His band director influenced him and prepared him for his audition.

On the way to the audition site, the butterflies in his stomach got worse. He was scared to death. With every step he took to the audition room, he felt like his feet were made of stone. He was excited to audition, but wanted to get it over with. Dr. Diehl, the Blue Band director, brought him into his office, and sat a piece of music down and told him to sight read it. Arthur nervously brought his trumpet up to his lips and started to play. He knew to look at the key signature, the tempo, and other marking on the piece of music. He played the last note and brought his trumpet back down. Dr. Diehl took the music and left the office. Arthur thought it went OK. He didn’t understand why Dr. Diehl left and kept Arthur in the room. Finally, Dr. Diehl came back in with more music. Arthur didn’t know if the audition was going well or not. Arthur thought he was in his office for about 30 minutes. It seemed like he left and came back 20 times. The last time Dr. Diehl came in, he didn’t have any more music. He told Arthur that they would let him know in a couple weeks. He walked out of the office and looked up at the clock and noticed that he was in his office for about 15 minutes. Those few weeks had killed him. He just wanted to know if his dream was going to come true or not. He was concerned that since Dr. Diehl kept leaving that he wasn’t going to make it.

Finally, after a couple weeks he received a letter stating that he passed the music portion and was to report to the marching audition during band camp. Arthur jumped for joy. He was one step closer to being a part of something amazing. He knew practicing to sight read would help him. He believed that was the reason he passed the music audition. He went to marching audition during band camp. He learned how to march their style, learned all of their commands, and finally auditioned in front of a panel of judges. After, he received news that he had made it. His dream finally came true. He knew his band director would be proud of him. After he received the news, he drove around University Park and screamed at the top of his lungs that he made it into the Blue Band while he blew his horn. All of his friends were happy for him and screamed right alongside him. He was one of the first students admitted into the Blue Band under the special admissions program. He was supposed to go to Hazelton, an off-campus for Penn State University. Since he made it into the Blue Band, he was transferred from Hazelton to University Park. He knew since ninth grade he wanted to be a band director. He believed being in the Blue Band would help him be a successful band director. He wanted to be just like his own band director, doing what he did every day. Now, he was one step closer to living his dream.

The day finally came, the first home football game for Penn State. The team went against Houston at Beaver Stadium. Arthur rode his bike to the Blue Band building. He was so excited to perform with his new family. He picked up his uniform and started his way back to his dorm. Everyone in the band was supposed to get dressed at their dorms. Then they would walk over to the Blue Band building. Suddenly, out of nowhere, a red convertible Mustang came towards Arthur and hit him, knocking him off of his bike. Arthur had landed on his left elbow, and it started to swell. He panicked; he thought that he would not be able to perform that night. He thought he would miss out on the first performance, and he was devastated. His elbow swelled up to the size of a golf ball. In a weird twist of events, it rained the first home game and the band didn’t perform. He was really lucky that it rained. Thankfully at the next home game, his elbow was much better, and the band was able to perform.

The next week was another home football game for Penn State, against Maryland. It was time for the Blue Band to come out of the tunnel. Arthur was excited but nervous once again. He got the feeling of butterflies again, but for a whole new reason. He knew he had a job to do. They got the signal to get ready, and they had to get in the zone. The drums went out first and played their cadence. He could hear the crowd cheering, cheering for them. His heart started to beat a thousand times a minute. It was time for them to go out of the tunnel. The band came out and got to their opening set. Arthur brought his trumpet up to his lips, just like at the audition, took a big breath, and played the first note of the show. The crowd screamed with excitement. Chills went down his spine. He couldn’t believe what he was doing. After he performed, he didn’t believe that it was over. His heart was still beating, like a drum during the cadence. He knew he made the right choice about auditioning for the Blue Band. One performance down, five more to go. After the last performance, it’s all over until next summer where he would have the butterflies back in his stomach once more.

Arthur was fortunate to be in the Blue Band for four years. After graduating with a degree in music, Arthur was on the Blue Band staff for two years. Arthur has been teaching music for about 40 years now. He has made an impact on every student’s life that he has come in contact with, and will keep doing so until he retires.

NHL will head right to playoffs if it returns